NOW OFFLINE DUE TO COPYRIGHT FROM AFI: Simon is an undercover space agent whose new mission finds him on Earth awaiting pickup by his parents' spaceship
READ REVIEW
Next Previous 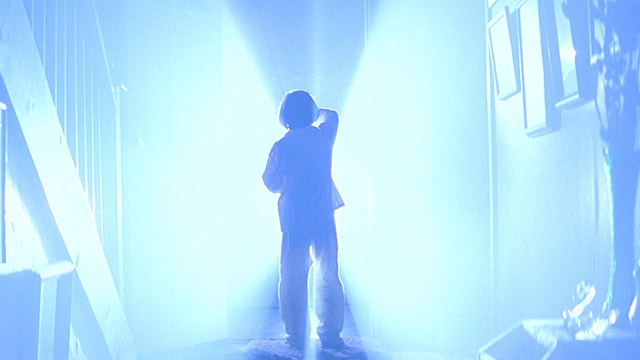 Ivan Kander
Young Simon is not from this planet. He’s deep undercover, you see—observing us normal humans for the benefit of his own population back in his native galaxy. Or, is he? Coming in at a brief nine minutes, director Graham Tallman’s AFI short, Codename: Simon is a difficult film to discuss without spoiling its solemn reveal. To be clear, this isn’t a “twist” short by any means, but still, consider this a heads up for those who’d rather watch the film in its entirety before venturing into further analysis. As the story progresses, we learn the truth behind Simon and his situation, and in turn, the film transitions into a touching reflection about denial, grief, and isolation. The film’s extended metaphor—the idea of feeling like an alien in response to sad events—is as simple as it is profound. After all, when submerged by the weight of grief the world does feel foreign. Happiness seems strange. Normalcy seems ludicrous. How can the world keep going on when one feels so much personal pain? For Simon, he copes by retreating into the emotionless void of space—a governor general with a higher purpose. He’s not weighed down by weak human traits like feelings or a desire for a personal connection. He’s above all that, opting instead to be the sterile observer who clinically documents the world for his compatriots back in sector Alpha Five. Made way back in 2004, Codename: Simon had a solid festival run, screening at more than 50 festivals worldwide. Visually it’s an impressive short—everything from the production design (check out the patterns on the Aunt’s dresses!) to the cinematography (Anamorphic lenses and 35mm film look so damn purdy) are top notch. The film has a very old-school “Amblin” vibe. Yet, director Graham Tallman captures that familiar tone without ever veering into hackneyed facsimile (I’m looking at you JJ Abrams). After completing the short, Tallman penned a feature screenplay of the same name. Although revolving around a slightly different premise (a boy believes his Mom is marrying an alien), the script got some impressive industry attention. It appeared on the coveted Black List and was in development with Beacon Pictures (Disney) for several years. Unfortunately, as is all too common with Hollywood specs, the film has since been let go by the House of Mouse and is still waiting to find a home. But, Graham Tallman isn’t resting on his tucas. Beyond being offered several writing assignments and completing a found footage thriller, he’s currently in the pre-production stages for his first feature film with over a million dollar budget. It’s scheduled to shoot early next year in Canada.
Vimeo Tumblr
LIKE TWEET