During an opulent and luxurious banquet, complete with cavalier servers and valets, eleven pampered guests participate in what appears to be a ritualistic gastronomic carnage. In this absurd and grotesque universe, an unexpected sequence of events undermines the endless symphony of abundance.
READ REVIEW
Next Previous 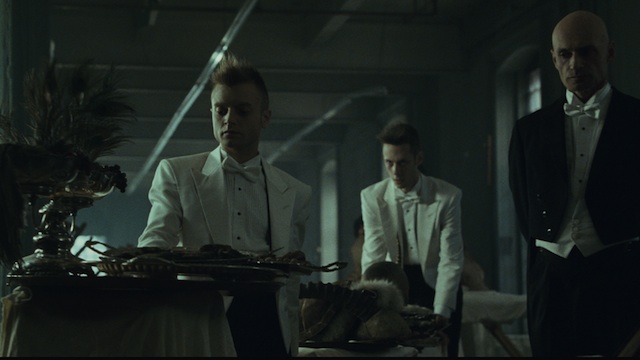 The breakout star of the Fall movie scene isn’t someone that you see on screen. I’d argue that it is Denis Villeneuve, the gifted French-Canadian formerly best known for his Oscar-nominated film Incendies, but who now can add “#1 movie in America” to his resumé with the tense, Hugh Jackman, Jake Gyllenhaal thriller, Prisoners. Villeneuve is poised to complete that tricky vault from the art-house to the A-list, and mainstream fans will soon be treated to another dose of his cinematic vision with the upcoming Jose Saramago adaptation, Enemy.

We internet viewers are getting a shot at the Villeneuve love-fest too, as PHI has generously released Villeneuve’s acclaimed short film Next Floor, for free on Vimeo. Based on an original concept by the creative force behind PHI, Phoebe Greenberg, the film cast a long shadow on the 2009 festival scene, scooping up dozens of awards during its run including the title of Canada’s Best Short Film.

The opening shots immediately impart an understanding of the acclaim. “Opulent” is a word used in the description and it is apt, as the production design is possibly the best I’ve ever seen in a short (we greatly prize production design). Art Director Jean-Marc Renaud gloriously constructs an atmosphere of old-world money that is fraying at the edges. Combined with the cinematography, the themes of the film—extravagance paired with an uneasy foundation to support, are readily visible in every shot.

The film’s tone is odd. With simple lighting that creates large areas of shadow and a blue/green color profile usually reserved for serious, dramatic work, there exists a sinister tinge to the proceedings, and the sheer collection of upper crust characters connotes conspiracy. However the buffoonery of the dinner guests, the large brush outlines sketched by their costumes and mannerisms, hint at a satirical tone that is strengthened by the sheer ridiculousness of the action. Yet again though, the youngest female character, with her obvious reticence, her clear seeing eyes to the horror before even as she participates, tugs the film back towards drama.

What is it all mean? In my mind the allegory is clear, but don’t let me impose upon the frame of your viewing. We’d love to hear your take in the comments.