A down and out vagabond's luck is dramatically altered when he treads on a piece of glass outside the apartment of an arguing couple.
READ REVIEW
Next Previous 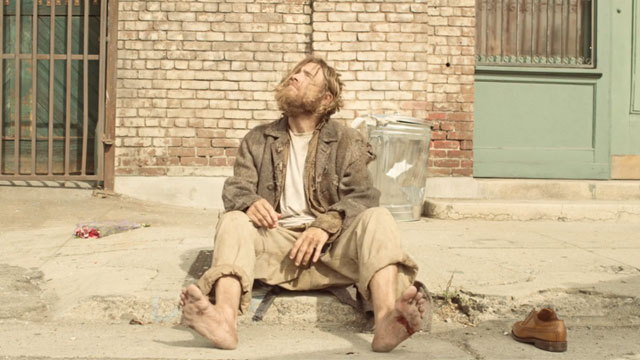 I’m not going to waste words proclaiming that Philip Sansom’s One Man’s Loss is deep and nuanced entertainment. It’s not. But, it is damn well crafted—a beautifully shot wonderfully put-together little fable about fate, karma, and a pair of $500 shoes.

Already a staff pick on vimeo, One Man’s Loss is receiving some deep love from the online community, and frankly, it’s easy to see why. This is a short tailor made for the internet. Brief runtime? Check. Gorgeous visuals? Double check. Compelling story and solid acting? Yup and Yup.

If Sansom’s name sounds familiar, he directed and co-wrote The Black Hole, a storied short that took home the Grand Prize at the Virgin Media Awards in 2008. Continuing the trend with One Man’s Loss, Sansom’s stuff just looks polished—his visuals indistinguishable from much larger Hollywood fare. It’s easy to see his experience as a music video director creeping into every frame. A special shout out to cinematographer Ross McLennan for really honing in the film’s sun-kissed golden look. Magic hour does indeed look magical.

To state the obvious, I watch a lot of shorts, the majority of which are dramatic with a CAPITAL D. Sometimes a guy just needs a break, and One Man’s Loss is just what the good doctor ordered—a purely cinematic narrative where even your dirtiest of vagabonds looks like a supermodel (to be specific, that’s surfer come designer Tracy Feith). As soon as you hear the opening bars from The Lovin’ Spoonful’s Summer in the City, you know you’re in for a delightful six minute ride.
Phix Film Philip Sansom
LIKE TWEET