An elderly couple finds excitement in breaking and entering.
READ REVIEW
Next Previous 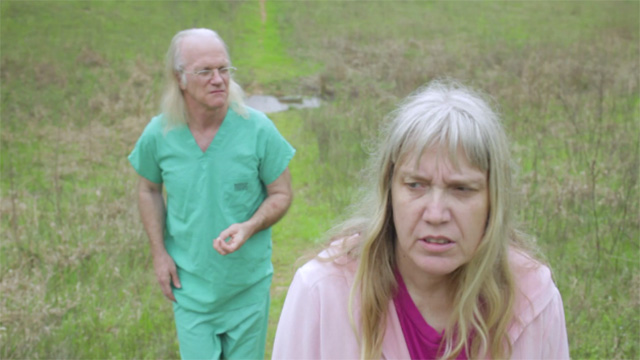 The medium of short film is heralded as being a format in which filmmakers can experiment with style and content, all the time developing a reputation as a unique voice in their field. Exploring some unusual new angles of storytelling, Nathan Honnold and Alex Zhuravlov’s peculiar short LaDonna takes a fairly common place narrative theme and injects some fresh life into it with some inspired casting.

Premiering at South By Southwest 2013, LaDonna is a tale of an elderly couple (LaDonna Allison & Bill Pacer) looking to engage in some adventurous activity in an abandoned home. As the excitement of their escapade intensifies, we witness the lovers descend into a state of youthful bliss, in the process becoming completely oblivious of the dangerous situation they have entered in to. Talking to co-director Nathan Honnold via email, I was interested to explore the reasons behind the duo making a film about a couple of more advanced years and what he thought his actors brought to their story: “Alex and I wanted to make a film about a generation that feels overlooked. We wanted there to be a return to youth in the excitement of making the abandoned trailer a hideout and we knew that Bill Pacer and LaDonna Alison could bring this to screen. Bill and LaDonna are a real couple and just got married recently and the energy of their new love came across on screen without the need of any direction. Their offscreen love made the quiet moments of the film much more successful”.

LaDonna wasn’t always the film the directorial duo planned to make though, with a script already written for a different film starring its lead performers, Honnold described how the narrative only took place after a recce to the planned filming site. “The concept for the film developed from the location. We had a script written for LaDonna and Bill, but when we checked out the location, in Althens, GA, it was in worse condition than we thought. So when Alex and I saw that there was a series of tunnels and escape routes dug through the foundation by the previous meth head tenants, we wrote a new script based around the fantastical location.

Tonally reminiscent of the work of innovative filmmaker Harmony Khorine, the measured pacing and unconventional narrative of Honnold and Zhuravlov’s 9-minute short mean it won’t be a film to everyone’s tastes. However, if you search out shorts with a basis in storytelling and a strong sense of character development, you’re likely to find LaDonna a refreshing and rewarding experience.

With a couple of shorts films in various stages of production and a feature film script about two overly tanned Miami sisters and their adventures of love with goblins and hispanic gangsters in development, we expect to see a lot more from the emerging talents of Honnold and Zhuravlov in the not too distant future.