Lost in the woods, A young boy makes a bloody pact with a dying wolf.
READ REVIEW
Next Previous 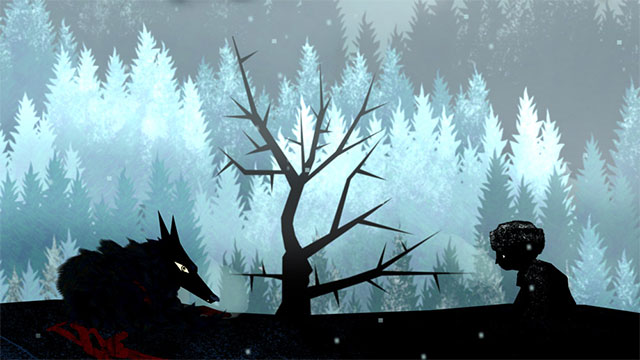 Described as “the children of the night” in Bram Stoker’s Dracula, wolves have become somewhat of an archetypal villain in storytelling throughout the ages. And whether they are hunting alongside the Count, eating grandmothers or bothering pigs, the wolf has gained a pretty bad reputation in the world of narrative fiction.

“You must kill me. I’ll give my life to save yours.”

Taking a leaf from Kipling’s book and presenting the wolf in a much more positive manner, Carn from French animator Jeff Le Bars is the dark and atmospheric tale of a wolf mother who sacrifices her own life to save a lost young boy, in return for his promise to protect her young.

With such a powerful narrative at its core, Carn was always going to need to some outstanding production values to ensure the film’s audiovisual elements weren’t overshadowed by its striking plot and Le Bars and his sound designer Sylvain Livenais pull out all the punches to ensure this isn’t the case. Visually, the short is outstanding, the animation utilising colour and texture perfectly to help create the tense and engaging mood of the film. Combining stark silhouettes, intricate detail and some beautifully designed backdrops, Carn is a short you can watch over and over again, enjoying and appreciating some different aesthetically each time. Pulling it all together and making it all sing in harmonious unison is Livenais subtle yet influential soundtrack – a heady blend of meticulous sound effects and sparse music that ensures you are totally absorbed in the richly detailed universe in which our story unfolds.

Created as his graduation film from the École Emile Cohl art school in Lyon and already played at festivals around the world, including the prestigious Annecy animation festival, Carn is certainly making a name for its obviously talented creator. With the story, visuals and editing all produced by Le Bars alone, if this arresting short is the beginning of a burgeoning filmmaker career, we should be expecting great things in the future of this emerging animator.