In a lifeless urban landscape where time itself has stopped its crawl, a mad ballet is commencing and a newly hatched butterfly is about to die. A celebrated mixed-media experimental film combining stop-motion, 3D modeling and CT scans.
READ REVIEW
Next Previous 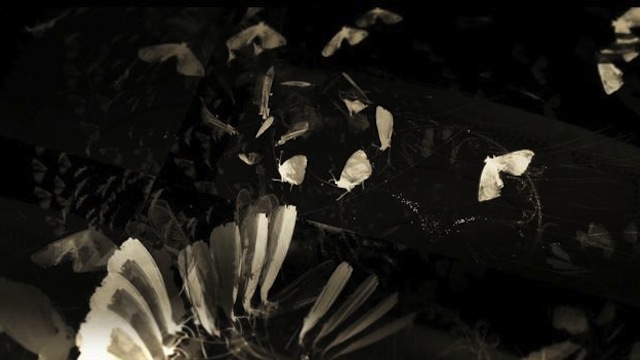 The Finnish dream team of Hannes Vartiainen & Pekka Veikkolainen have today released online their 2010 masterpiece, The Death of an Insect, a beautifully macabre experimental work. Collecting “dead insects gathered from forgotten attics and tool sheds, between window panels and cobwebs” the duo fuse an innovative mix of techniques in crafting a poetic ballet of carcasses, exploring two immutable facts of insect nature—their fragile individuality and the stunning force of their swarm.

The sheer estrangement one’s experience when watching the animated depictions is remarkable. Macro shots alternate with puppetry, interspersed with X-rays, creating a wealth of interesting visual stimulation. Even for myself, a fairly knowledgeable animation layman, what was being done with the images is often hard to decipher. Fortunately for those technically minded, Pekka has provided an immensely in-depth series of behind the scenes posts, as well as a video.

In addition to the visual splendor, an impossible to overlook aspect of the work is the soundtrack by Joonatan Portaankorva, who creates a diversity of moods to match the film’s movements. Sharp, crackling sounds accompany dark, paranoid, fast-cutting macro sequences, yielding to a whistling march in sequences that mimic photographic “stacking”—tracing the image of a moth’s flight.

Premiering at Venice, the film came to our attention via the novel Couch Fest, run by SotW contributor Craig Downing. The film had an excellent festival run, premiering at Venice and winning the prestigious, and now sadly defunct CFC Worldwide ShortsFest as well as hitting stops like the International DocFest Amsterdam. The film is one of 4 that the filmmakers have collaborated on, and today marks the online debut of two additional, and highly recommended works, Hanasaari A & Gates of Life, which you can check out on their Vimeo page. Be on the lookout for their most recent piece as well, Emergency Calls. If, like me, you can’t get enough of these gifted creators, that work will be highly anticipated.