In rural Trinidad, Dhani struggles to support himself and his mother by selling doubles (Trinidad’s quintessential street food). When his estranged father returns from Canada unexpectedly, Dhani must decide if he will help save his father’s life despite their strained relationship.
READ REVIEW
Next Previous 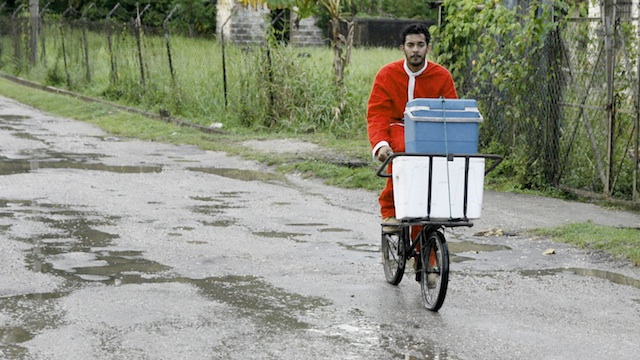 Doubles With Slight Pepper is a fantastic family drama, one that expertly plays with your allegiances like a yo-yo. It is a true character piece, developing, complicating, and, ultimately, contradicting what you come to expect at any given moment of the film’s 16min.

Centering on the familial triangle of Son, Mother and Father, director Ian Harnarine has transformed Trinidad into a setting for some of the grandest themes in drama: Revenge, Love and Forgiveness. The father’s illness and Dhani’s anger are heavy subjects, yet through the quality of its acting, and the tone of its writing, the film impressively manages to imbue lightness around its moments of drama.

Indeed, it is undoubtably the very mature blending of tones that contributed to the film’s award success. Dhani for example, is a classically caustic comedic character, always seeing the problematic side of things, always wondering what burden will be placed on him next—a Woody Allen minus the nebbish quality. The father on the other hand is a charmer, a slick-talker, and we, as an audience, find it pretty easy to be won over by his pleas for forgiveness, lacking of course the deep scars of abandonment that Dhani carries.

But, does the desire for forgiveness have an ulterior motive? And whom ultimately is the resentment that Dhani nurtures hurting the most? Harnarine’s provides occasion to reflect on these sophisticated questions, though he provides no easy answers. The characters are messy, just like family itself is inherently messy.

The film is currently in the process of being adapted to a feature length, and the project has been accepted into the “emerging storytellers” section of the IFP Project Forum taking place in September. Follow along with the film’s evolution at Harnarine’s website.