The Mystery of Flying Kicks

Murder, sex, drugs, art & politics... A film exploring the mystery of why sneakers appear on telephone lines around the world.
READ REVIEW
Next Previous

The Mystery of Flying Kicks 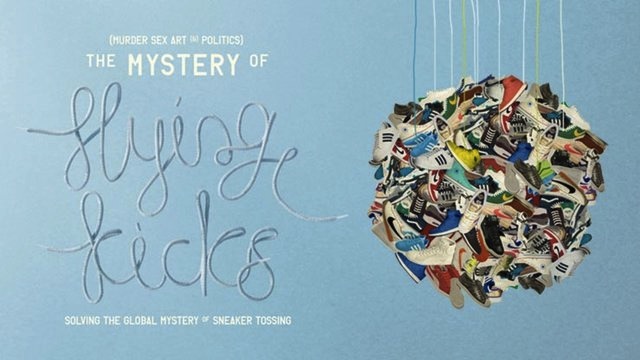 An investigation into a worldwide phenomena that has for too long has been unexplained, The Mystery of Flying Kicks is a bold example of front-line journalism—filmmakers, risking it all, to doggedly seek out the truth in defiance of entrenched power…oh wait  it’s not that kind of documentary at all. It’s a film about shoes hanging from wires, which is about as inconsequential a mystery can get. So maybe the key mystery is, why is this film so damned great?

A festival favorite from 2010, The Mystery of Flying Kicks is a welcome divergence from the profile documentaries that dominate the short form. It is about an honest-to-God, topic! One that just happens to be a little silly on the surface. Director Mathew Bate however is a silly like a fox. The sheer universality of shoes, tied by their laces, thrown over a power line, is astonishing—who among us haven’t wondered what’s that about?  Like a great comedian, Bate has uncovered a banal aspect of life, examined it, and upon closer inspection revealed a remarkable story about a phenomena, and a subculture dedicated to it.

The inspiration arose from a 2006 tour of the US. Bate, an Aussie and self-confessed sneaker-head, took hundreds of photos and asked locals what the meaning behind the sneakers were. He received wide ranging answers—they were celebrations of virginity lost, they were markers for drug deals, they were remembrances of murdered friends. More fascinating than even the mystery were the numerous blogs, message boards and photo-sites dedicated to exploring the act. Accompanied by skillful animation, the film is a slick mixed-media production which playfully reveals the hidden conversation taking place around the world.

Bate has made a name for himself through these kind of whimsical examinations of culture. A previous short, What the Future Sounded Like, had a strong festival run, as well as TV play in Australia. A feature film following Flying Kicks, the well received Sundance film Shut Up Little Man!, is another document of an obscure, but compelling cultural oddity, this one about the famed audio verite recordings. Bate has a unique voice in the documentary field, and with the online release of The Mystery of Flying Kicks, we hope we can bring his perspective to a wider audience.