One of the most celebrated of all modern shorts, Terminal Bar is a fascinating pictorial history of a New York City bar whose customers, from the hard-drinking working class Irish to the coiffed African American gay male, continually transform its focus during a 10-year period.
READ REVIEW
Next Previous 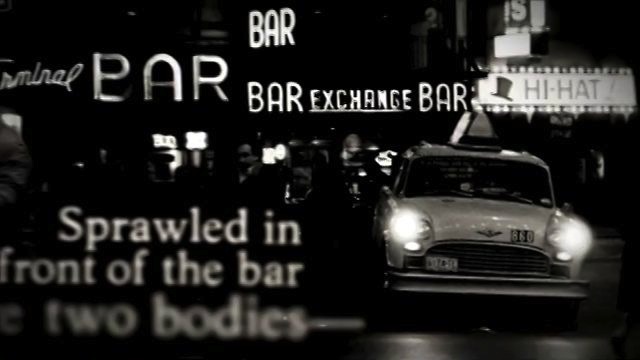 Terminal Bar, the Sundance Jury Prize winner for short form in 2003, tells the story of the the titular Manhattan bar, which was located in Times Square until 1982, and it’s myriad of tough, damaged, hard-drinking customers. Using his father Sheldon Nadelman’s black-and-white photographs from that time, taken while working as a bartender, Stefan Nadelman uses Flash Animation to paint a picture of a by-gone era of New York.

The majority of the people portrayed in Terminal Bar, besides some actors or boxers, lived on the edge of society in one way or another, and there is a grimy desperation to the depictions. The film never feels over-long during it’s 23 minute run time, convincingly creating an atmosphere of how life of those who spent most of their times in bars like this must have felt like. It’s fascinating how the use of comments on various profile photos, underscored with moody sound design and intermingled with narration about the bar’s history, makes for a compelling and engaging short film.

One of the early masterpieces of digital short filmmaking, Nadelman, an animator by trade, uses animation to selectively accentuate the wealth of photos bequeathed him by his father, using multiple images within the frame, often adding text and motion to create a dynamism that standard archival-based docs often lack. The result was revelatory, as the film was a phenomenal hit when it was released in 2002, winning Sundance, the audience award at the prestigious ResFest festival, and an award at Aspen Shortfest. Today it is still often cited as one of the great modern shorts of our time, its reputation cemented in the mind of short film loyalists through its inclusion on ResFest and Cinema 16 DVD compilations. Now, 10 years later, the film is online is full as part of Sundance’s curation of the YouTube Screening Room.

Terminal Bar to me feels like an interactive documentary before the form even existed as a genre, and I can’t help but wonder what possibilities would lie in a conversion of the film’s story and characters to an interactive form. What say you Mr. Nadelman?