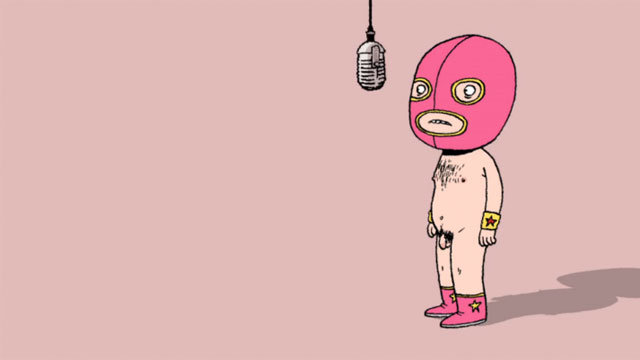 What would you do ask for if you were granted one wish? This is the question filmmaker Andrew (Griff) Griffin and illustrator Scott Garrett ask in their recent animated collaboration Wish List. However, instead of aiming this investigation at members of the general public, our creative duo direct this dilemma at an imagined bunch of misfits and weirdos.

So if you could have any one thing, just the one wish fulfilled, anything at all, what would you choose?

Based on Garrett’s illustrated series of the same name, Griffin went about bringing the artists creations to life, all the time focusing on not destroying the original impact and humor of the artists original drawings. Starting with the mouth first and keeping movement minimal, Griff subtly animated all the characters himself aiming to add only embellishments to the original characters.

Described by the director as “the most enjoyable job I’ve ever worked on”, Wish List radiates fun from every pixel of its 180-second duration. Whilst this is likely to be one of the briefest films you’re likely to discover on Short of the Week – what it lacks in length it certainly makes up for in comedic moments. Featuring around 30 characters, each with their own bizarre, yet strangely understandable request, the punchlines deliver in rapid succession landing rib-tickling blow after rib-tickling blow. It’s not often you’ll come across such a short short with such a great pay-off and it’s a film that keeps giving – I’ve watched it numerous times now and find something new to laugh at every time. Although I have to admit, the seagull is my favourite.

Feeling like a modern expansion on Aardmans legendary Creature Comforts (one of the first films to be reviewed on SOTW), where we’re also allowed a brief glimpse into a world foreign to our own, Wish List works due to its ability to feel totally unrealistic, yet somehow relatable in equal measures. I mean who here hasn’t wished for human contact, happy dreams or some bones!