An animated journey into the future of a young couple moving in together for the first time.
READ REVIEW
Next Previous 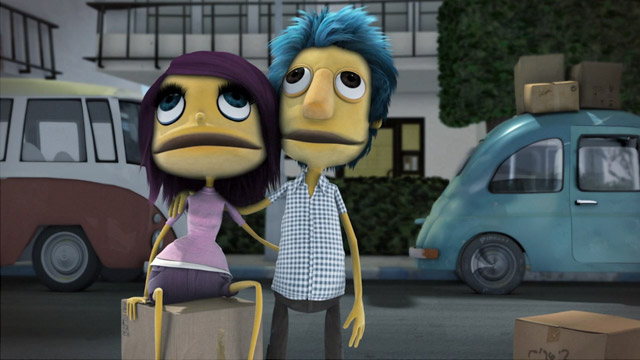 Just a few seconds into Yonni Aroussi and Ben Genislaw’s Happily Ever After and you just might convince yourself that you’re about to watch something as cheerful and bright as the main character’s electric blue muppet-hair. At first, it’s the stuff straight out of storybook young love. Our yellow-skinned protagonists are moving in together and everything just seems so damn perfect.

But, this isn’t a generic, digestible narrative—romantic fluff depicting the idyllic journey of a young man and woman destined to live a happy life. After all, where’s the drama in that? As the story kicks in, the bright colors fade and we’re left with the whirlwind reality of life—an endless trod punctuated by kids and arguments and past due bills, all of which culminates in the depressing acceptance of old age.

Sure, that’s ostensibly a lugubrious notion, especially when contrasted with the film’s computer generated muppet-inspired visuals (after all, no one really wants to see Guy Smiley struggle with depression). Yet, I’d argue that Aroussi and Genislaw’s film isn’t a condemnation of marriage or kids or all the rest of that “adult stuff.” Rather, it’s an animated short about balance. As the film’s central visual metaphor reminds us, life is a conveyor belt through a multitude of emotions and experiences—some good, and some bad. And, so life takes up residence somewhere in the middle of both those extremes—that mystical corner where Sesame Street crosses Avenue Q.

From an animation standpoint, the visuals are quite unique—a sort of “tangible” computer generated world that stands out amongst a field that is chock full of copycat styles. The character designs are equally impressive. It’s a marvel to watch as they subtly change through the years: visibly different, yet still recognizable. The film seamlessly moves through time, employing a multitude of clever transitons and smart symbolism.

Graduates from Israel’s Bezalel Academy of Art and Design, Aroussi and Genislaw continued to work on the film two years after graduation. All the 3D work was done by the duo and they essentially taught themselves Maya through the process. As Aroussi states, “we aimed and tried our best from the beginning to give our characters this organic ‘non-cg’ look. We felt this served the story best.”  Based upon the final look of the renders, I’d say they more than succeeded.