A robot with medical training is dispatched to defuse a dangerous situation.
READ REVIEW
Next Previous 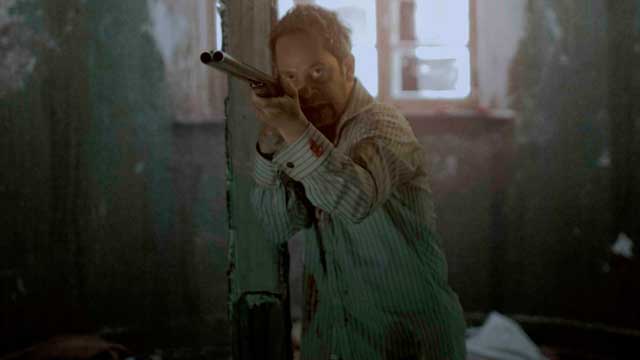 Sci-Fi about Society in Special FX
Directed By Jason Groves, Richard Kenworthy and Christopher Harding
Produced By SHYNOLA
Made In UK

Adapted from the opening chapter of the 2007 Matthew De Abaitua novel The Red Men, science-fiction short Dr. Easy is the explosive tale of a robot sent to negotiate with a desperate gunman. Holed up in the siege house, armed with a double barrel shotgun, his tongue shot out by snipers, Michael’s only hope of escaping this deadly situation lays in the metallic hands of the film’s titular android.

From Isaac Asimov to Philip K. Dick, robots have been a mainstay of science-fiction tales for a number of years. Yet where in the majority of stories we’ve become used to them rising up against their human creators, the Dr. Easy model is here to help. Described in the book by protagonist Nelson Millar as a robot designed to help people when they get mad (Millar is describing the oddity to his young daughter Iona), this cyborg is negotiator, paramedic and psychologist all wrapped up in one neat, lanky package.

Whilst the negative ones among us may look at Dr. Easy and groan at the thought of another science fiction short hitting our screens, this is a short film of some pedigree. Featuring cinematography by Barry Ackroyd (The Hurt Locker, United 93) and visual FX by Jellyfish (Jonah), directorial collective Shynola (Jason Groves, Richard Kenworthy and Christopher Harding) continue the excellent work already created for musicians Coldplay, Queens of the Stone Age and Radiohead with this visually rich, conceptually dark short backed by Warp Films and Film4

If the open-ended conclusion of Dr. Easy’s almost 10-minute duration leaves you hungry for more, don’t fret, the short acts as a prologue for a planned feature adaptation of De Abaitua cult dystopian novel.

Dr. Easy launches a part of Film4’s partnership with Vimeo, a collaboration initiated by the television channel with the hopes of reaching wider audiences for its shorts and gaining exposure for the filmmakers behind them.