Chewing gum. A dog leash. An Australia shaped stain on the wall. A bent traffic light… Each of these elements has its own story, even though all of them together can create a new plot.
READ REVIEW
Next Previous 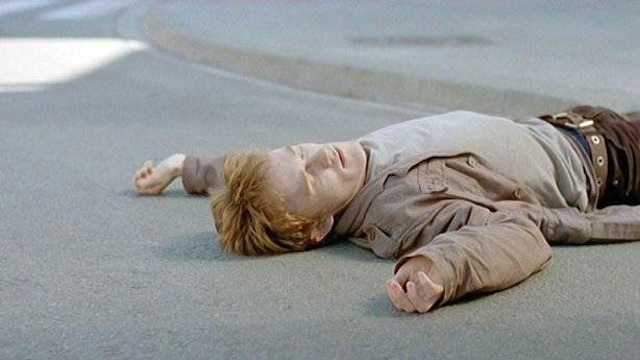 La Huida is 2 films in one. Or maybe 1000. Victor Carrey’s remarkable short film is an interesting puzzle, a deconstruction of an event from a plethora of viewpoints that is full of digressions and details that delight even as they confuse. But don’t worry, it all comes together in the end.

Generally we view voice-over narration with skepticism. It is too often a crutch for filmmakers to commit that cardinal sin of telling, not showing. However, while voice-over usually is a blunt tool of exposition, in La Huida, the voice-over (admirably performed by Joaquin Diaz) is the antithesis of simplification. Instead the script overwhelms you with rapid-fire observation, setting up a seemingly disconnected series of objects, characters and events, all the while probing the interior psychology of characters that may or may not be relevant to the ultimate action. It is charming but unreliable narrator who sets up our scene.

It’s a lot of fun too. Shot on 35mm with flashes of New-Wave style, the film is impeccably designed and edited. The droll narration and vintage styling of these tableaus, which are presented as asides, is certainly reminiscent of Wes Anderson—as is the thoughtful and effective use of contemporary music in the film’s second half.

As for that second half: the narration conceit of the first half is abandoned for a slow motion, straightforward unfolding of a single event, one that gloriously ties all the specificity of detail presented before. It is not an elaborate Rube Golberg, which would have been uncannily difficult, but even more fun if Carrey could have pulled it off, but it does justify the approach of the film’s first half, and showcase Carrey’s carefully honed music video chops.

The film in a way strikes me as a sort of essay on the overuse of slow-motion, though I have no way of knowing if that’s Carrey’s intent. Slow motion is certainly pervasive in contemporary music videos, often for no good reason other than “it looks cool”. Carrey’s film is a meditation on the ramifications of artistic use of the technique. When you go slow, every detail of movement is heightened, and every element in the frame has more time to be considered, and through the brilliant juxtaposition of the first and second half Carrey highlights exactly this. If your event has epic significance, then all the elements of that event are significant, from the can in the street, to the kid on the sidewalk jumping up and down. Carrey has created a humanist observation of a scene, and while it doesn’t adhere to strict cause and effect, it is a rumination on the potential for stories all around us, which is truly a lovely thought to explore.