A lone traveller makes his way through an airport before finally accepting his journey's end.
READ REVIEW
Next Previous 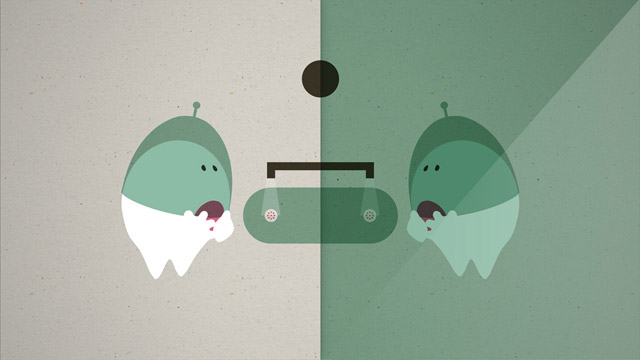 A benchmark in both iconic motion design and restrained narrative storytelling, Eoin Duffy’s On Departure is as much a technical achievement as it is an emotional one. We here at Short of the Week often point to the short form as a catalyst for innovation—as a harbinger for new storytelling techniques and methodologies. On Departure is the perfect encapsulation of that idea: a compilation of audio visual abstraction and creativity packed into five tender minutes.

Based on his own personal experience in dealing with his younger brother’s suicide, Duffy crafts a stylistic journey of a traveler navigating through an airport. He is surrounded by a world of sterile efficiency—of clean shapes and symbols that offer nothing to assuage his grief. Free of dialogue, the film drifts on, pulling you into its grasp. As the musical score slowly builds, you melt into Duffy’s world.

The motion design field is profoundly influenced by trends. A fews years back, kinetic typography was ubiquitous. Now, it seems that the rise of the infographic has directly influenced the motion designer’s toolkit.  Well, Duffy takes the principles of “iconography” and gives them new life. Beyond the film’s emotional catharsis, as a viewer, it’s hard not to marvel at his ingenious use of simplicity to render the complex. As the risk of sounding hyperbolic, this is a masterclass in minimalist design. I’d also be somewhat remiss if I didn’t mention the music. The clean visuals are backed by a striking, emotional score from veteran composer Stephen Rennicks. If it doesn’t give you goosebumps, you’re made of stone.

A graduate from DIT in Dublin, Duffy has gone on to a successful career in commercial animation. This success has allowed him to parlay his efforts into more narrative endeavors. On Departure was produced under the 2011 Frameworks funding program from the Irish Film Board. The collaboration has proved to be fruitful—Duffy has just completed his second short for the Irish Film Board entitled The Missing Scarf, which is narrated by George Takei. Motion Designers and short film fans alike take notice: Eoin Duffy has plenty more minimalist magic up his sleeve.