This dog has a new best friend—his own tail! An award winning 2.5D animated short from director Milen Vitanov.
READ REVIEW
Next Previous 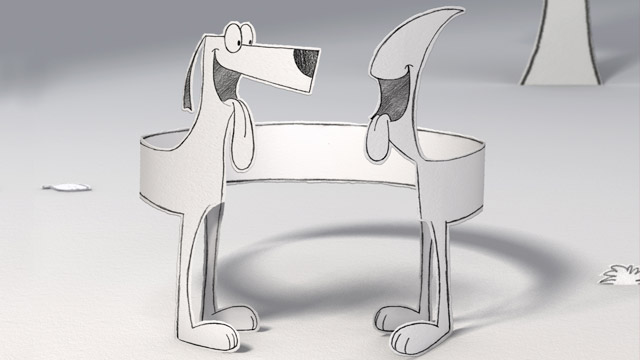 Sometimes you just need a quick pick-me-up. It’s a gloomy, rainy day here in Washington, DC, and dang it, a short like My Happy End was just what the doctor ordered. Finally making its way online after several years of post-festival limbo, this fast paced, charming, and altogether adorable bite-sized film from director Milen Vitanov is delightful mishmash of different animated styles. The result feels like an old school silly symphony Disney short made for a digital age, backed by upbeat music and a multitude of sight gags.

The premise is inherently clever—a dog finally succeeds in catching his own tail, and in turn, his life changes irrevocably. I’m not going to argue that My Happy End is some deep complex narrative, but over its five minute runtime, the film bounces along with such energy, such goodwill that it’s hard not to be won over by the end.

My Happy End was Vitanov’s graduation project from the University of Television and Film in Munich, Germany. It made quite the festival tour, shown and awarded at festivals such as Annecy and SIGGRAPH. Now, Vitanov is a member of Talking Animals, a cutting-edge animation studio comprised of some of Berlin’s best and brightest talent. If you dug this short, be sure to check out the studio’s other work, especially the colorful and similar paced, Flamingo Pride. Suffice it to say, expect more great things from Talking Animals in the future.
Vimeo Production Co. Website
LIKE TWEET