The Pirate of Love Vol. 1

The Pirate of Love is an animated documentary about an outsider musician, Daniel C. This is an oral history that follows one mans soulful songs of love, pride and loneliness.
READ REVIEW
Next Previous

The Pirate of Love Vol. 1 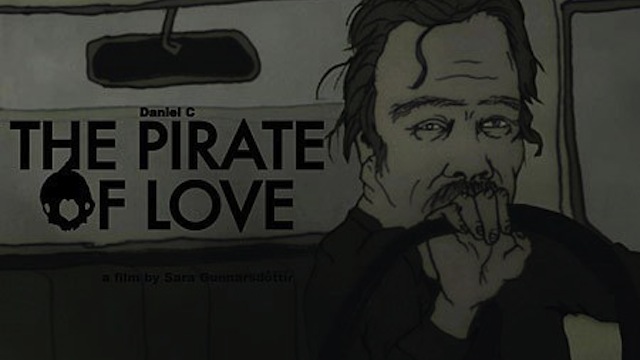 Documentaries of any length excel by identifying unique and fascinating subjects, and the mystery surrounding outsider musical artist Daniel C. and the creepily beautiful album he created, certainly qualifies.

A riveting example of one of my favorite genres, animated documentary, CalArts student Sara Gunnarsdottir investigates the surprising influence and popularity of Daniel C. in her native Iceland. Daniel C. took on practically mythic qualities due to the lack of information about him. The most commonly told story was that he was an immigrant, long-distance truck driver in Canada, when he recorded a remarkable love album to his object of desire, marked by both its lo-fi amateurishness, but also its striking emotionality.

The record was, as the legend goes, stolen from his locker and copied. Years later it had circulated through underground music forums until it was discovered and championed by a section of Iceland’s musical cognoscenti. Even as the music entranced, the mystery endured: who was Daniel C. and who was his love? An underage neighbor? A truck stop waitress? No one knew.

Gunnarsdottir uses the freedom of animation to depict the story, surreally visualizing the lyrics of Daniel C.’s songs, and dramatizing the mystery of Daniel C.’s identity by imagining him in various forms, from rough blue-collar worker to sleazy lounge lizard. It’s a great use of animation in documentary, as the lack of access to the core subject, would make conventional documentary techniques very difficult.

After a very strong festival run, the film comes online with an interesting new twist: evidently Daniel C. has found out about his peculiar fame, and earlier this month reached out to Sara. She is currently prepping a Volume 2 of Pirate of Love, crowdfunding through the Icelandic site, Karolina Fund. I’m tickled at this development, and can’t wait to learn more about this enigmatic poet.