A family's idyllic life is interrupted when the father is killed while defending the family from an intruding bear.
READ REVIEW
Next Previous 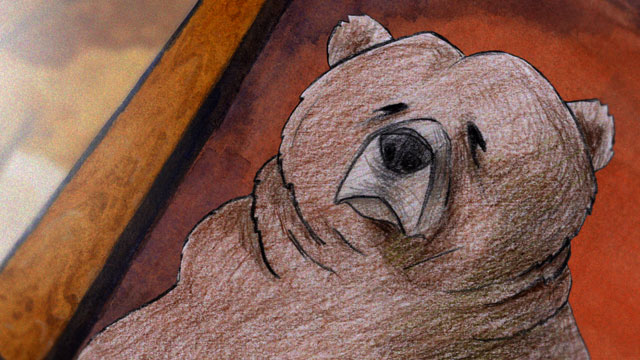 Inspired by discussions of responsibility and his brother’s sketch of a mom and son watching out the window as a dad was mauled by a bear, Sean Buckelew’s unusual animation Another is a hand-drawn, 17-minute labour of love, tackling themes of family, death and bereavement. Started in 2008, whilst studying at The Art Institute of Chicago and completed at the California Institute of the Arts (where Buckelew is currently studying in the Experimental Animation department), Buckelew has finally put the finishing touches to his showpiece short after 5 years of blood, sweat and tears.

Once the bear has his foot in the door, he finds himself implicated in a family dynamic he did not expect.

With all the animation created with pencil on paper (scanned into Photoshop and composited in After Effects) Another has a distinct visual style to accompany its unusual narrative. Mixing cartoonish visuals with the dark motifs of his story, Buckelew has created a poignant short bound to cause its audience to soul-search. Speaking to the director over email, we questioned the innovative filmmaker to find out more about the contrast between the style and content of his short and whether this was a conscious design of the production.

“There is some deliberate tension between the cartoon qualities of the characters grinding against the laborious, darker aspects of the narrative. I think the way the characters look creates certain expectations about content that are definitely fun to play with too. I’ve got a lot of love and reverence for some of the traditional tropes of animation, and I’m sort of over the traditional conventions of the more “sick and twisted” subversive cartoon. I like to think that this is just another animated cartoon about anthropomorphized animals, maybe expanding on that lineage by having an awkward/cheating bear on bear sex scene.”

With his studies currently focused on the more experimental side of animation and his previous work exploring the boundaries of filmmaking (films don’t come much more abstract than the director’s previous short Boyfriend), Buckelew seems to be an artist determined to test the limits of his chosen medium and present his audiences with fresh and inventive viewing experiences. And the medium of animated short film seems to be one he is genuinely excited about working in:

“It seems like time and money used to really prevent single animator productions from making unconventional work that didn’t look amateurish or DIY, but just browsing around Vimeo and Twitter and looking at student work from the Royal College of Art and wherever else, the work of young animators working alone is way more exciting than the stuff I see coming from studios. The films can go toe-to-toe with any huge production aesthetically, but have none of the restrictions.”