Risking injury and incarceration, an environmental activist disrupts the clear-cutting of an ancient redwood grove by sitting on a tiny platform up in the tree canopy.
READ REVIEW
Next Previous 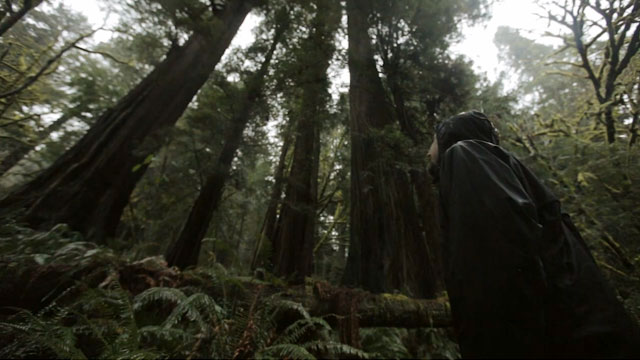 Ivan Kander
When I hear the term “tree huggers,” I immediately think of a cliché hippie stereotype. You know, the free spirited, dreadlocked white dude who flashes peace signs while wearing a ragged tie-dyed shirt. Well, Among Giants, a short documentary from the team over at Rainhouse Cinema, does its very best to eschew conventions. For one, the film’s tree hugging protagonist, Farmer, is surprisingly reflective. As he speaks, explaining his self-imposed struggle to save an ancient redwood grove in California, the expected free love platitudes never come. Instead, his conversation is personal, intimate, and understated. His love of nature—his willingness to spend three years on a tiny platform a hundred feet up in the tree canopy—is simultaneously crazy and heroic.

Shot in a lovely, understated style, Among Giants is as much a nature film as it is a socially conscious one. Apart from select sections, the movie exists almost entirely without a musical score, opting instead for the ambient sounds of the forest to comprise the soundtrack. The result is serene, practically mediative. While the film would never stoop so low to say it outright, it’s clear that the creators are encouraging all to embrace individualism, to retreat back into all the transcendental glory that nature can offer. In the words of Emerson, “Adopt the pace of nature: her secret is patience.” And, so Farmer and his comrades do just that—patiently wait amongst the treetops, sitting peacefully to stop destruction. As the film climaxes—as one of the few noticeable musical cues hits—we are treated to gorgeous aerial cinematography, juxtaposing both the beauty of the existing forestland with the elegiac destruction of logged areas.

Among Giants screened at numerous festivals on the circuit. And, really, it’s success shouldn’t be a surprise. Rainhouse is comprised of three extremely talented filmmakers and cinematographers—Sam Price-Waldman, Ben Mullinkosson, and Chris Cresci. The mission of Rainhouse Cinema is to make films that center around people and the environment. Based on their current track record, I’d say they’re more than succeeding.