A desperate mother takes drastic action to protect her disabled daughter from a juvenile gang.
READ REVIEW
Next Previous 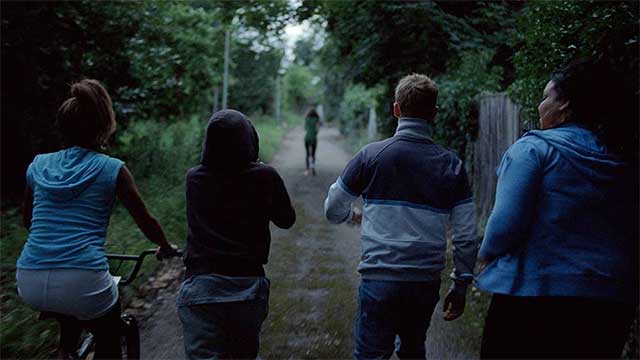 Carrying on the impressive directoral work he displayed in the long-form music video Consequences of the Kill, filmmaker Oliver Goodrum once again displays his passion for a strong narrative in hard-hitting short drama This Is Vanity. Telling the story of an isolated mother battling to protect both herself and her disabled teenage daughter from the endless attacks of neighbourhood adolescents, this desperate parent soon finds herself turning to a greater power in search of the help she so urgently needs.

At over 20 minutes in duration, Goodrum’s short could have been in danger of being limited to festival audiences, with its lengthy format meaning it may have struggled to translate to the world of online film—where attention is often divided and time limited. This is Vanity successfully avoids this pitfall by quickly hooking its audience with a (literally) explosive beginning and continues to captivate throughout with an ambitious narrative, powerful performances and striking visuals. Speaking to Goodrum over email, I was interested to find out where the story originated from and what attracted the director to such a potent plot:

“I came across this horrifying headline and had an opinion almost forced on me which then totally reversed when I read the article and this was exactly what i was looking for in a short film. At the time I found the story, I was doing a lot of research in to evil, nature vs nuture and general dark themes. It was just something that affected me enough that I wanted to say something about it i guess.”

Despite his shorts weighty length, Goodrum isn’t done exploring the world he introduced us to in This is Vanity and plans to extend his narrative over a further two films – This Is Iniquity and This Is Solidarity. The director told us about his plans for his This Is trilogy and where he plans on taking his story next.

“This Is Iniquity would follow Michael, the ‘bad’ character and then This Is Solidarity would follow Officer Peters, the face of the Police. The films would focus on the affects of the event on each of the characters and how it changes them, taking a similar format or structure to This Is Vanity. We have a trailer cut together for This Is Iniquity which will be hidden at the end of the film once released online and we are now trying to work out an approach to fund them.”

Exploring this narrative over another two films is a bold and ambitious move from the young British director, but if he can replicate the drama and power captured in This Is Vanity, whilst providing new angles to his already well developed story, We may well have that rare anomaly of a short film trilogy that actually works.