A group of uncommunicative neighbors closely monitor a new tenant’s movements until they meet via their intercom.
READ REVIEW
Next Previous 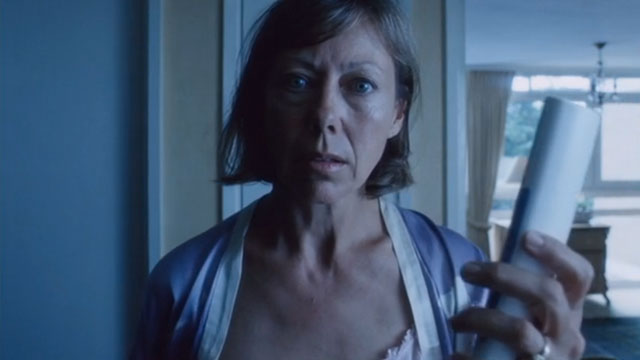 Mark Gutteridge’s Intercom is a movie about human nature. And, if that statement sounds a bit too grandiose and general, it’s largely because I don’t want to give away too much of the plot. This is a short that sneaks up on you, starting slow and building to a thematic climax that is as disturbing as it is fascinating.

The setup is simple—the residents in a block of flats have a new and noisy neighbor. And, generally, they’re not happy about it. Told mostly without dialogue, each neighbor quietly goes about their business, until eventually they are all forced to meet via their intercom. What plays out feels like a very British take on the stories of John Cheever—a suburban look at human nature, at a desire for normalcy even when things are decidedly not normal. You see, we humans tend to like to avoid confrontation—we’d rather passively aggressively stew or kvetch under our breath rather than have to deal with the uncomfortable torture of human interaction. Don’t believe me? When did you last e-mail someone when calling them would have been so much more efficient?  Intercom crafts this sentiment into a tightly constructed narrative—a nine minute examination of Genovese syndrome that would be just as at home in a psychology classes as it is in a film school lecture.

Visually, Intercom looks gorgeous. Shot on 35mm by industry regular (and Mike Leigh collaborator) Dick Pope, Gutteridge’s film looks gloriously analog with its sumptuous film grain and muted blue and cadmium yellow hues. The cast, comprised of a slew of veteran British character actors, are all top notch. Since the film’s use of dialogue is so sparse, they are given the difficult task of saying things without being able to literally say anything. The final series of shots is a haunting example of how truly effective silence can be.

Mark Gutteridge’s work has screened at numerous festivals around the world, so it seems crazy that I’m just being introduced to his canon now. If you enjoyed Intercom, be sure to watch his more recent short, Assessment, which has screened at cinemas throughout the UK before feature films as well as most major UK festivals.
Vimeo Twitter
LIKE TWEET