The first narrative film about the early life of street artist Shepard Fairey and the origin of his OBEY GIANT street art campaign.
READ REVIEW
Next Previous 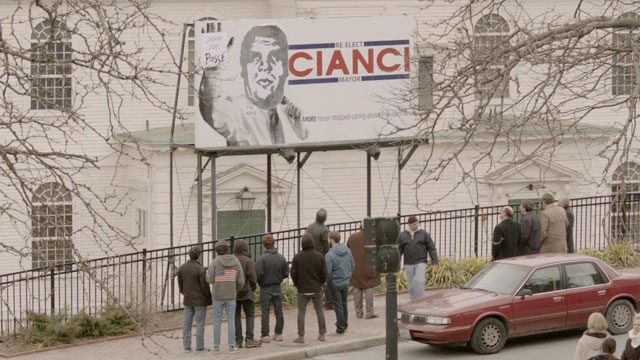 Today, street artists have essentially become modern day Robin Hoods—swift and nimble rebels who aren’t afraid to stick it to the “man.” They’re the shepherds of counter culture, taking art out of elite museums and giving it back to the people. And, with each stunt their mythoi grow. They become icons, rockstars, even legends.

But, before Banksy became Banksy, before recognizing street art became cool or even well-known, these shadowy artisans were just kids—skaters, young punks, college students. Julian Marshall’s Obey the Giant is a short biopic of one of the most recognized in the street art game and his rise to initial prominence. The name Shepard Fairey is probably familiar to you—he’s the punk rock pop artist behind the Andre the Giant “OBEY” campaign. He’s also the guy who crafted the now ubiquitous Barack Obama “Hope” poster. But, even if you’ve already heard the name, you’re probably not aware of his roots—his time at the Rhode Island School of Design (RISD) and how he turned a simple lithograph of an iconic wrestler into a media induced frenzy.

Obey the Giant is the rare thesis film that feels like anything but—an impeccably crafted, narratively thrilling biopic that has more polish that your average studio feature. No corners were cut here—sweeping jib shots, impressive steadicam moves, gorgeous Alexa cinematography. Visually, this looks sharp. But, narratively, the film delivers as well. It would have been conventional (perhaps expected) to have told this story in documentary form, but Marshall wisely opted for a true cinematic approach. The result is something that exists in the same vein as 2010’s The Social Network, just trade Harvard final clubs and software code for art studios and spray paint.

The production of the film is almost as fascinating as the story on screen. A RISD student himself, director Julian Marshall interned for Fairey in 2009. And, so, a few years later when it came time to actually make his final year film, one of Fairey’s own Andre the Giant posters served as creative inspiration. In a moment of epiphany, Marshall thought, “Wouldn’t it be cool to tell Shepard’s origin story on screen?” He quickly crafted a pitch and sent it to Amanda Fairey, Shepard’s wife. One week later, he was called out to LA to meet with Shepard in person. He had the green-light.

From there, the production took on a life of its own. According to Marshall, all told, around 250 people—from RISD students to industry professionals—worked on the film. All props were created practically, including the 27,000 pound mammoth Obey billboard that becomes the major set piece for the film. Marshall and his crew even went as far to construct a  2,500 square foot replica of Shepard Fairey’s studio from 1990. The result was the rare occurrence of art imitating life. The fervor in Providence over the film’s production was comparable to when Shepard first started turning heads in the early 90s—an evolution from reality inspiring narrative to narrative reinforcing reality.

In the end, was it all worth it? I’d say so. Obey the Giant feels like more than just your average short internet film—the click and play stuff that feels constrained by its streaming format. Frankly, it just feels big. And, so in its creation, it’s all the more remarkable that not a single studio suit was involved. In a way I suppose that’s sort of fitting. I’m sure Shepard Fairey wouldn’t want it any other way.