A geriatric mother and her twenty-something son embark on a road trip to meet some dastardly drug dealers in order to replenish a supply of certain herbs.
READ REVIEW
Next Previous 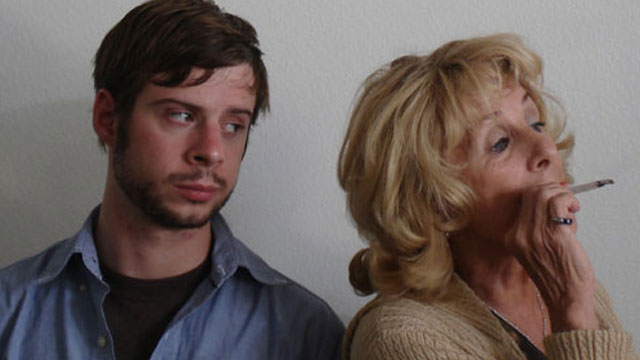 Yes, as the title suggests, this is a short film about a mom who smokes weed. However, as my third grade teacher once told me, never judge a book by its cover (also, don’t eat glue). That’s some solid advice, especially when applied to this great little comedic short from director Clay Liford. Frankly, if you’re expecting an over the top stoner comedy, you’re going to come away disappointed. Liford’s film is more Duplass brothers than Harold and Kumar. And, let me tell ya’ folks, that’s a good thing. A Sundance official selection from back in 2010, My Mom Smokes Weed has a surprising amount of depth considering its burnout-friendly title.

Neurotic and unsure of himself, our protagonist desperately needs to chill out. His mother, conversely, is at the other end of the line—a go-with-the-flow maternal figure who’s so uncool, she may actually be cool. The film shows both ends of the spectrum, and in the end, it seems to suggest that the best way to go through life is by situating yourself somewhere in the middle. The message may not be groundbreaking, but Liford comes across it in a novel way—it’s all blazing joints, bong rips, and old mom jokes, when all of sudden, the film finds our main character conversing with a drug dealer about some serious emotional stuff. And so, when the movie hits its “message” moment, it’s completely unexpected and surprisingly affecting. It’s also tastefully low key, shrugged off a moment later with more antics and jokes.

As we make our first short films, we tend to ape someone else’s style—in an attempt to discover who we are as storytellers, we often just take things from movies that we like a lot. While I don’t deny that Liford’s film has similar elements to other work, I can honestly see a true original voice here—more confident and tonally unique than its stylistic brethren.

Largely though, this is a short that is very much dependent on its actors. It’s tough to pull off that natural vibe in such a heightened situation without coming off as totally false. Here, the two leads nail it. The son, played by Nate Rubin, has that whole mumblecore thing down—he’s a Woody Allen who doesn’t try as hard, and that fits the movie swimmingly.

Creatively, Liford is a very busy guy. Although My Mom Smokes Weed just made its way online, it’s certainly not his only film. He has directed numerous shorts (Wuss from 2011 premiered at SXSW) as well as the feature, Earthling. His latest short, Slash, is currently making the festival rounds. He’s also an accomplished cinematographer who has shot on numerous projects for other filmmakers. Frankly, he’s a guy who seems to have his hands in all the right places. Remember Liford’s name—I promise you’ll be seeing a lot more of it soon. At the very least, I’ve got high hopes (pun, regretfully, intended).