Thumb Snatchers From the Moon Cocoon

This 100% hand-made, action-packed short film tries to keep up as a Texas Sheriff hilariously massacres a race of clumsy aliens. Insane badassery to the nth degree!
READ REVIEW
Next Previous

Thumb Snatchers From the Moon Cocoon 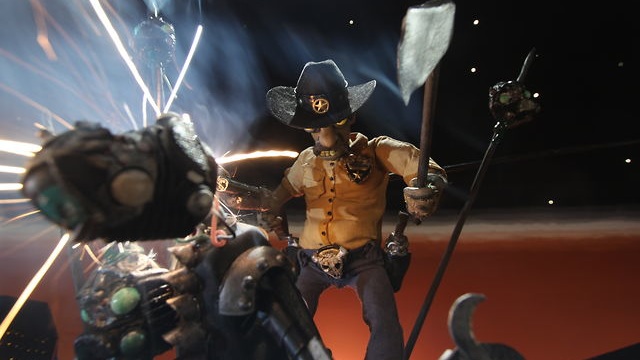 Texas has a rich, bordering on mythical, history of gun-slinging lawmen. We thought this legacy reached it apotheosis with internet-meme/actual person Chuck Norris, but we hadn’t yet met the Sheriff of Bradley Schaffer’s CalArts student film.

With absurd grandiosity, this Texas bad-ass dispatches a peculiar invading force of thumb-fetishizing aliens with bombastic righteousness. To reference This Is Spinal Tap, Schaffer takes an absurd premise and turns it up to 11. Probably around the time the Sheriff blasts his pickup into space to deal with the alien horde head-on is when we realize that this Sheriff, along with Schaffer’s imagination, has no limits.

Created in charming hand-made stop-motion, the film is very reminiscent of an old Sundance favorite, I Live in the Woods, but even more blown out. That’s high praise. Max Winston serves as a connecting thread, supplying the music for this film which played at Slamdance in 2012. A manic epic compressed into 7 minutes, Thumb Snatchers of the Moon Cocoon is an entertaining flick that will leave you wondering afterwards “what the hell did I just watch?“