A vengeful Easter bunny plots to steal Santa’s sack, and in the process, learns something about himself that will change Christmas forever.
READ REVIEW
Next Previous 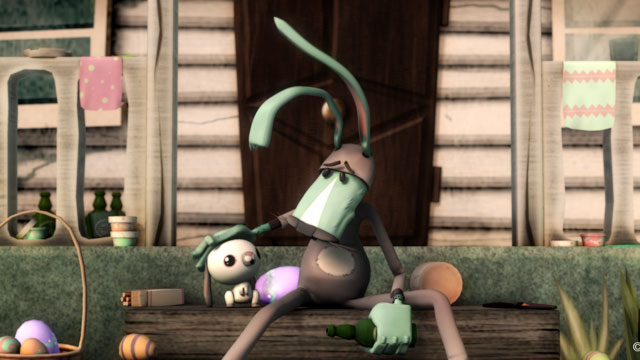 The poor Easter Bunny—when it comes to our collective treatment of mythical holiday-themed creatures, he always seems to get the short end of the stick. Well, at least when compared to that festive purveyor of Christmas joy, Santa Claus. I mean, really, it’s not even a fair fight—one gives out eggs, the other gives out lots and lots of toys. You do the math.

And so we have the spawning point for Yukfoo’s Preferably Blue, a CG animated short about alcoholism, depression, and the magic of the holiday spirit. Lonely, bitter, and addicted to painkillers, our protagonist is a jealous Easter Bunny who vows to steal back the holiday spotlight from jolly ol’ St. Nick. The resulting film plays out like a combination of The Nightmare Before Christmas and The Grinch, with a hint of vodka thrown in for good measure. This isn’t your average wholesome holiday watching—the typical idealized rendering of a good natured, oversized bunny is replaced with a scrawny, filthy little specimen who looks more like Steve Buscemi than a cuddly furball. Santa is given similar treatment—he’s more bearded biker dude than lovable, red-suited fat man.

The character design is just the tip of the proverbial visual iceberg. The team at New Zealand production house Yukfoo has crafted a truly unique world—a place that’s colorful and charming on the surface but has a distinctly dark edge underneath the veil. The tone is similarly schizophrenic—humorous and irreverent one second, a bit sick and twisted the next. All in all, it’s a bit of a tough film to classify, and perhaps, that’s what makes it so intriguing.

Told using a series of narrated rhymed couplets, the writing is definitely on the clever side—I just wish the story had a bit more of a narrative payoff. By the end, everything feels a bit too random for my liking. But admittedly, that’s a minor nitpick, especially considering all the animated goodness that the film has to offer. Plus, since the film played at some major festivals—from Tribeca to SXSW—it’s safe to say that it has some serious critical clout.

So, this Easter give that scoundrel of a Bunny his due.  And, in the meantime, I eagerly await more narrative work from those Kiwis over at Yukfoo.* You know, preferably soon.