Abel lives in the winter and Apolline lives in the summer. Isolated in their "natures", they never met each other. But, their encounter will soon become more complicated than they could imagine. Both of them will have to learn compromise to protect the other...
READ REVIEW
Next Previous 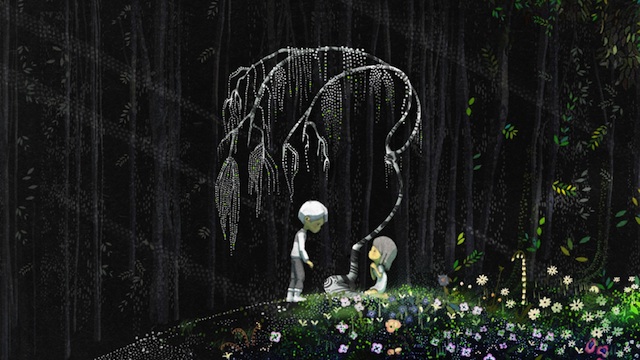 Stories of the seasons dominate mythic fairy tales. The duelling natures of summer and winter often battle for the soul of earth’s surface as the cycle of life turns over and over again. Persephone and Hades, the story of Co-Chin. Poets and writers have created a landscape of stories to explain this dramatic, annual transformation. Directors Carlos De Carvalho and Aude Danset, at Je Regarde, use modern technology and design to reinvent a timeless story for a modern day audience.

Apolline, the keeper of summer, sits pensively, bored in a luscious landscape, surrounded by playful puppies. Abel, the keeper of winter, runs with the skeletal remains of his dog pack in a frozen part of the forest. Both children know nothing about the other, alone in their temperament. Apolline has a moment of kismet when she discovers a tree that is half in bloom. She acts as though she has never seen a plant without leaves. Her curiosity attracts the attention of Abel. He runs toward her with his pack. Apolline immediately acknowledges the danger that Abel brings into her world. Everything the dogs and Abel touch turns brown, withered and covered in snow.

Apolline runs for her life. After a chase through the woods, Abel realizes the effect that he and his dogs have in Apolline’s world. His regret encourages him to call off his pack. They retreat back into Abel’s part of the forest. Apolline reaches out to him one last time by returning one of his dogs who lost the way. In that moment, they understand nature. The knowledge of the harm they cause does not discourage their wonder.

Premier Automne is a remarkable work, and will be honored by screening at the upcoming Annecy Animation Festival in June (lineup just announced!). This simple story of dual nature is reflected in many aspects of the story and design. Children of different genders represent two opposing climates. Summer is decorated in a colorful landscape, blooming with plants, animated with life. Winter is monochromatic, inhabited by the dead. Two sides of nature, neither portrayed as the antagonist. Both characters express the pains of growing up. Curiosity leads them to discover each other. Naive and fearless, the representatives of both worlds comb through the world. This curiosity is cleverly represented by the puppy entourage. Each side embodies a balance of color and composition that could be printed as illustrations in a fairy tale book. The last scene is a visual poem. A playful chase around a tree animates its blooming cycles. The directors end this tale on a whimsical explanation for the cycle of the seasons and nature itself. This moral reminds us that opposing forces are not motivated by destruction; rather, they exist to keep life interesting.