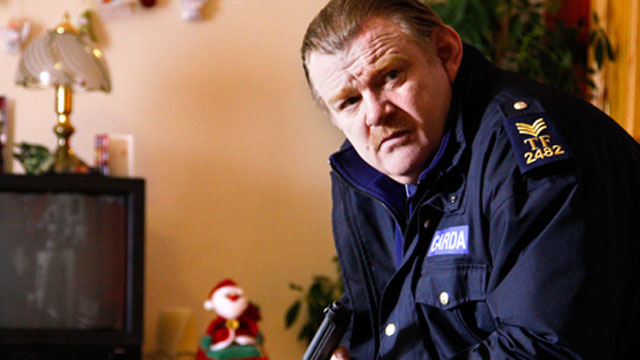 Just in time for St. Patrick’s Day comes this comic gem from Irish actor Domhnall Gleeson. Although he’s appeared in some very big films (the Harry Potter franchise, the Coen Brothers’ True Grit), he stays behind the camera for this one, leaving the dramatic (and comedic) work to his father, veteran character actor Brendan Gleeson, and his brother, Brian Gleeson. If you’ve seen the Irish film The Guard, you’ll know that Brendan Gleeson very much enjoys skewering Ireland’s police service, the Garda. In Noreen, he plays Con, the older of two cops called to investigate a report of “a loud bang” at a rural cottage. His partner Frank has just gone through a very painful breakup with the titular Noreen, and isn’t shy about displaying his messy emotions. Con’s of a different generation, not one to talk about “feelings,” so after taking his partner for an ice cream, they go to investigate. A simple situation soon becomes complicated, mostly due to the fact that these are not the two brightest lights on the force. As Con tries to use the case to “further hone [their] skills” as police officers, evidence is tampered with, and there is more bloodshed, but at least it takes Frank’s mind off Noreen.

There is a long and storied tradition in Ireland of mocking country folk, and these two bumpkins are all the worse since they think they are the guardians of the law. One gets the sense that there isn’t much excitement in their professional lives. Con is not unlike many a country cop before him, wanting a real mystery to solve rather than just the everyday police work to be found in a sleepy village in the middle of nowhere. Filmed in County Offaly, in the heart of Ireland, Noreen conveys the boredom of living away from the big city, yet still manages to show affection for its rural characters. Both Gleesons are excellent, with the older Brendan mastering the distinctive dialect of the area, while Brian plays the wide-eyed rookie cop with equal parts deference to his partner and heartbroken instability. While the comedy is dark, there is real heart here. It wouldn’t be a stretch to say that writer/director Domhnall may have picked up a few pointers during his time working with the Coens.