When the crew's wages are stolen from a feature film set, it is up to the ambitious PA to recover them, and hopefully impress the producer while he's at it.
READ REVIEW
Next Previous 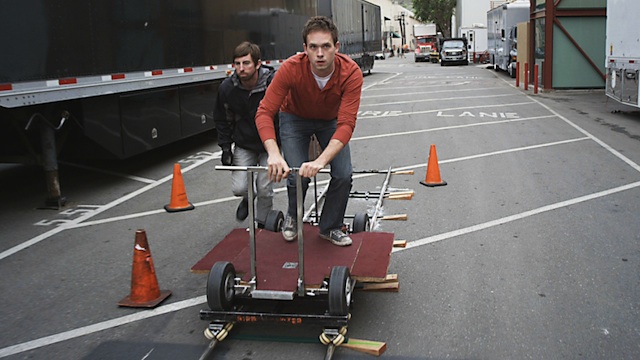 Filmed at the Warner Bros. lot, Kirk Sullivan’s ambitious, action-packed short The Come Up makes the most of its epic location with a sprawling chase sequence and an impressive series of stunts that would fit right in with the feature films and television shows produced at the studio.

With a plot conceived whilst working on the crew of his first major studio film, Kirkland and longtime writing partner Chris Boyd concocted an action-packed narrative with heavy doses of insider humour. Taking us on a whirlwind tour of a world of dollies, green screens, and pyrotechnics, The Come Up manages to provide an insightful and humorous look at life on the film set, whilst simultaneously thrilling us with the twists and turns of the pursuit.

While the production is snappy, it is the heart and the tone of the film that excels for us. A relatively straight-forward heist flick (albeit rife with the twists that define the genre) the script builds its character’s personalities well, and cleverly tosses off a few one-liners (“couldn’t do that if we were shooting digital!”). We also enjoyed the piece’s pleasing meta-nature—the film imagines an unknown PA executing an elaborate creative production to win himself Hollywood fame in much the same way that short filmmakers themselves attempt to do with their work.

So, for its smart script and awesome production values we heartily recommend The Come Up. We hope Hollywood success follows for Kirk Sullivan and his team much like it does for his character.