Bound, gagged and being buried alive, Ollie somehow feels he still has the upper-hand in this predicament.
READ REVIEW
Next Previous 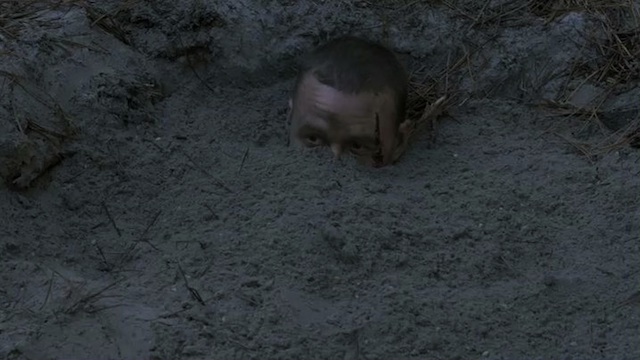 With takes longer than you may normally expect to find in any film, short or otherwise, and a strong focus on the holy trinity of filmmaking: storytelling, performance & cinematography,  Daniel Levi’s captivating thriller Nothing about nothing, takes a strong yet simple script and turns it into 12 minutes of weighty tension and escalating drama. With director Levi attributing the powerful transformation from script to screen to the “magic that happens when actors and film makers come together and create an atmosphere in which serendipity happens through a process of growing the characters from words on a page, to three dimensional, living, breathing human beings”.

Levi’s confident directorial style sees him employ a pretty leisurely pace to tell his narrative, giving his actors and plot plenty of time to build a tension that is almost crackling by the time Nothing about nothing reaches its climax. Dialogue is sparse, with much implied through intense looks and wavering facial expressions – but the principle point of tension in the film emanates from the disturbingly real burial scene in which actor Scott Sparrow is seemingly entombed in a grave of dirt. Discussing the scene via email, Levi was keen to praise Sparrow for his bravery and commitment in making this sequence as believable as possible:

“He really suffered for his art and I’m deeply grateful to him for helping me to tell this story. You may notice that as he gets deeper the more his jaw chatters – this is because the sand was extremely cold and that, for him, I think was the most uncomfortable part of it. He was incredibly willing and calm about the actual claustrophobic burying part and all of us in the crew were in awe of that. The sand was really heavy and once he was up to his shoulders it was impossible for him to dig himself out – he was paralyzed by the weight of it. He spoke about how this fed into his performance and his paradoxical surrender to being buried. I wanted to see his head go fully under and then stay on the shot for a long time as the sand continues to be piled on top of him. Staying on this without cutting, I hoped, would cause the audience to feel that it was intense and real. This was only achievable due to Scott’s bravery and willingness….and a breathing pipe”.

Like many of the best short films, Nothing about nothing doesn’t seem overly concerned with the past or future, this is a film firmly rooted in the here and now. There is no attempt to provide backstories for its two protagonists, explain how they found themselves in their current predicament or fill in any of the other blanks Levi’s plot might leave you pondering. Those looking for answers or wanting to know more, may end up a little frustrated by this short – the rest of us will just be happy to be taken along on this tension-fuelled ride