A set of strange creatures whose instincts, rather than focus on survival, seem to doom them to an absurd and comic extinction.
READ REVIEW
Next Previous 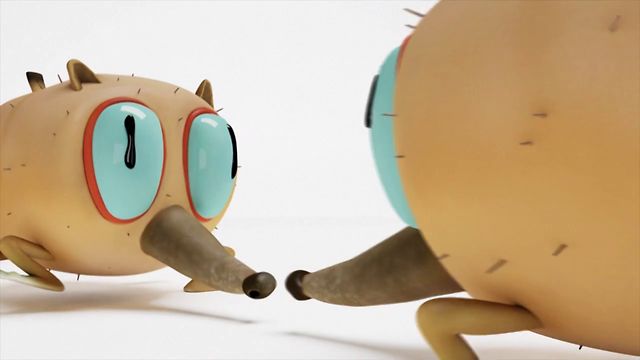 Mixing surreal comedy with a distinct visual style, Doomed: a biological cartoon! by Spanish production company El Señor Studio is a quirky short that introduces us to some of the oddest creatures animation has ever created. Whilst the documentaries that this short so wittily mocks may focus on the majesty and wonder of mother nature, Doomed seems more intent on getting its laughs from tragic, unfortunate creatures that seem destined for an absurd and comic extinction

“Inverted hedgehogs, Coral Parrots, strange songbirds and Cube fish are just some examples of the incredible and unknown fauna that I invite you to discover with me, in this fascinating new documentary series” – Taking us on this magical journey through the wondrous world of Doomed is the increasingly frustrated ‘narrator’, a one-time documentary star whose career seems to have dwindle in recent years. Becoming increasingly frustrated throughout the films 10 minute duration, the dulcet, unimpressed tones and serious nature of the narration combines playfully with the films jovial aesthetic, creating a few laugh-out loud moments along the way.

Written and directed by the studios creative director & founder Guillermo Garcia Carsi, this is a short that manages to showcase an originality in both narrative and technique, that has seen the film collect awards at film festivals in France, Spain and India since its release. With a videogame currently in production, we’ll hopefully discover the unfortunate creatures of Doomed back on our screens in no time at all…..if not I hope to discover a deep-fried Cube fish on my plate in the not too distant future instead.