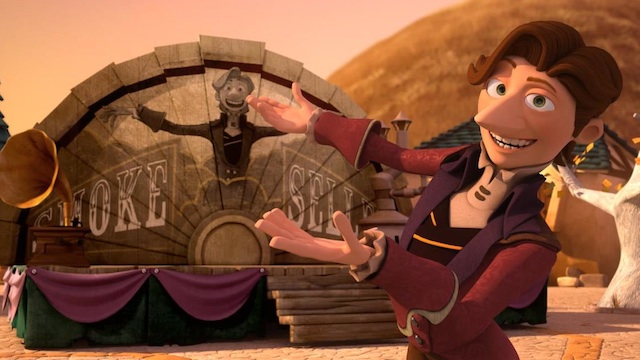 Award season is really long. Feels like awards have been handed out since before the New Year, but finally —FINALLY– it will culminate in tomorrow’s Oscar ceremony. However, the obsessive focus on Oscar means that we neglect a lot of other interesting awards out there.

Take the Goyas. They are the Academy Award equivalent in Spain, and, if you didn’t know, Spain makes some pretty fantastic short films. The 27th Goya Awards were given out last Sunday, and both the Live-Action and Animation Short Film winners happen to be online. Very progressive Spain! The live-action winner Aquel No Era Yo, is only in Spanish however, so let’s profile this piece, a bright and polished student work from PrimerFrame.

The film centers around a traveling “smoke seller” who, as the film begins, arrives in a new town to set up shop. With control of seemingly magical smoke which can transform objects at will, it doesn’t take long for our young traveler to become the toast of the town. But, as you might imagine, there is a twist in store…

We’ve actually featured Maestro and the students of Primerframe before, for a really excellent 3D short called Friendsheep. At the time I was pretty amazed that such a polished piece could come from an outfit I’d never heard of, but reading up on Primerframe it seems that they have a class-lead approach to their short production, with Maestro, a seasoned industry veteran, handling the directing and the entire class teaming up for finished product. In contrast to the individualist style of American animation schools, or the small-teams approach of French schools, it seems easier to produce very professional content in this way, and El Vendedor de Humo is exactly that—very polished, professional-level work—and when that skill is brought to a 3D short, the result almost always will put a smile on one’s face. =)