Threatened by the invading German Army in WWI, a group of misfits must band together in order to save Britain and the world.
READ REVIEW
Next Previous 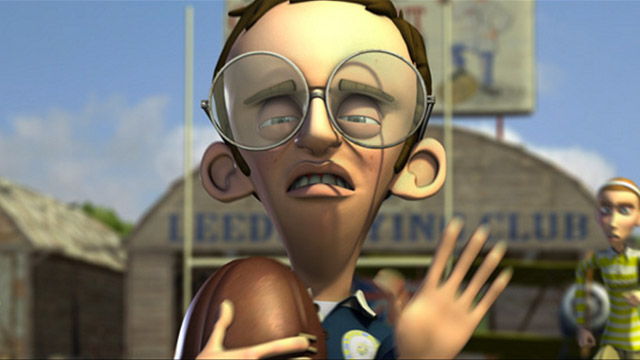 If there’s one thing the war genre could use, it’s definitely a bit of humor.  After all, I’ve sifted through enough super serious, high frame rate Saving Private Ryan ripoffs to know that, for all intents and purposes, it’s a decidedly played-out milieu. So, WHAM! From stage left, a refreshing influx of something new. CG Animation aside, Mark Nelson’s The Jockstrap Raiders plays like a great old Saturday morning cartoon—you know, the kind where you would you wake up early to watch in your pajamas while eating Lucky Charms. And, that’s what makes the film so special. It may have a shiny new technology sheen, but check under the hood and you’ll find all the classic storytelling machinations. Granted, I like all those abstract, new-media animation think-pieces as much as the next guy or gal, but sometimes, it’s nice to just relax and enjoy a straightforward, well-made narrative journey.

The film is equal parts Revenge of the Nerds and The Dirty Dozen—an underdog war film about a band of comically inferior misfits who must come together for Crown and Country. The writing is sharp and witty—the script filled with memorable characters and clever gags. For a 19 minute film (long by usual CG short standards), the short breezes by, its plot propelled by both its dialogue and set-pieces. When you take into account that Nelson created the film almost single handedly, the runtime is an even more impressive number. All in all, it took him four years to complete, working for months at a time while balancing student life at UCLA and his career as a visual effects artist. Fortunately, the film has been well received, snagging a Student Academy Award as well as several other festival laurels. I was lucky enough to first see The Jockstrap Raiders on the big screen in my hometown of Washington, DC, where it cleaned up at the District’s GI Film Festival. Well deserved, I dare say.

A big fan of old war movies, Nelson cites Kelly’s Heroes as one of his major inspirations. Regarding that seminal 1970s classic, he says, “It had some great action scenes, but somehow managed to have a lot of humor as well. I loved that combination. And it worked because the filmmakers weren’t making fun of the war, as that’s not funny at all, but making fun of the crazy characters and how they each deal with the situations they are in.” An astute point. You hear that war genre filmmakers? It doesn’t hurt to crack a smile every now and again.

As for the future, Nelson is currently in development of his first feature as well as a web series. Well, sir, I await both eagerly. I’ll be the one wearing pajamas and holding a box of Lucky Charms.