Classic face off with Death told through a series of drawings and objects.
READ REVIEW
Next Previous 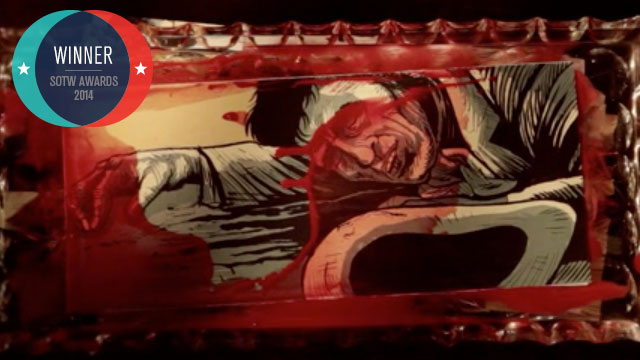 Novel ideas in storytelling fall into two categories—form over content or content that happens to have great form. Most films that use gimmicks tend to advertise the trick without considering the narrative at stake. Filmmaker Edson Oda had to come up with an idea for a film contest in a short period of time with a small crew. The result is a storyboard come to life. Malaria’s achievement demonstrates how limitations can encourage creativity to thrive.

The film opens with a shot of a wooden table. Disembodied hands pull a strip of paper with a drawing of the interior of a bar. The paper stops when a seated character reaches the left side of the screen. The hands form a frame around the character as a clue that the camera will move in closer. Another piece of paper falls down mimicking an edit. The character, an aged, asperous, western cowboy, sits alone, drinking. His eyes barely see through his long brimmed hat. The man reads a book at the table. A second character is presented in the next frame. He is also dressed in cowboy attire and slams a gun onto the table. Audio of this action is illustrated with comic-book lettering and heard in sound effect. The hands pull a book into frame, covering the previous drawings. Opening the book reveals the contents of the book the main character reads. Names and times are listed. The second character sits. As they speak, the main character’s true identity is revealed.

Oda’s storytelling technique has it’s advantages and disadvantages. At first, the manual nature of this film is a bit distracting. For example, the character’s dialogue is illustrated through a window that is hidden in the frame. The window is propped open with a letter opener held by the hands. It cuts off a portion of the frame. This would loose my attention if it wasn’t for the timing of the filmmaker. Oda give the audience enough time to observe the frame before he reveals the dialogue. He achieves this without sacrifice to the pace. At one point, the protagonist dares the antagonist to shoot him. The gun is layered separately on the frame and moves in the direction the character dictates. This movement demonstrates awareness and wit regarding technique.

Modus operandi aside, the story is as old as Genesis. Malaria follows in the footsteps of The Seventh Seal and more recently in Harry Potter’s The Deathly Hallows. Oda was smart enough to understand the complicated nature of this technique required a simple narrative that was somewhat familiar. Malaria uses this approach to its advantage. A familiar story about dying is treated anew.