The story of Lieutenant Commander Malleck, and her radical act of mutiny aboard the KESTROS IV. With the help of her co-conspirators, she attempts to harness this weapon of mass destruction for a grand new purpose.
READ REVIEW
Next Previous 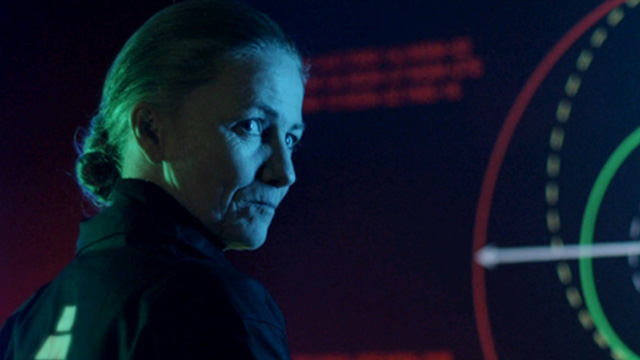 If you ignore that the film has a completely unmemorizable name, you will come to accept that C: 299,792 km/s is a film perfectly suited to the internet’s tastes. A paean to classic sci-fi of a less aggressive, more intellectual age, the film is a gorgeous labor of love that nails its retro feel in both look and story.

Birthed from successful Kickstarter campaign, the New York filmmakers caused a stir in sci-fi circles by proposing to create a film in the old-fashioned way—no CGI, no greenscreen—just impressive sets, models, and cool in-camera tricks. Armed with designs and tests, they raised over $37,000, which was more than twice their ask.

Now that the film has arrived, we see that money was put to good use. The film is lovely to watch, as the excessive colored lights, smoke, and unnatural sound design, are all perfectly modulated to make the childhood geek in you squeal. The touchstones are not just in production however. Though sci-fi has become pop culture, geeks used to be be known for loving science as well, not just explosions. Interspliced with the main action occurring on the film’s timeline, is a series of cutaways from a fake science program that owes its demeanor to classic Carl Sagan TV shows. More than a gimmick or a mere infusion of extra nostalgia, these segments foreshadow the film’s conclusion, develop the character logic and undergird the essential optimism of the piece.

The film’s production will get the most glowing praise, but elevating the retro nature of the film above simply look—via a cold-war standoff that is likewise from yesteryear, and astute references to speculative sci-fi of days gone by—makes C 299 792 kms, more than simply a great tribute to the genre’s past, but a great film in its own right.