A melancholy boy attends his estranged Father's wedding to a large Latina woman aboard a small and cramped boat on a shark infested sea.
READ REVIEW
Next Previous 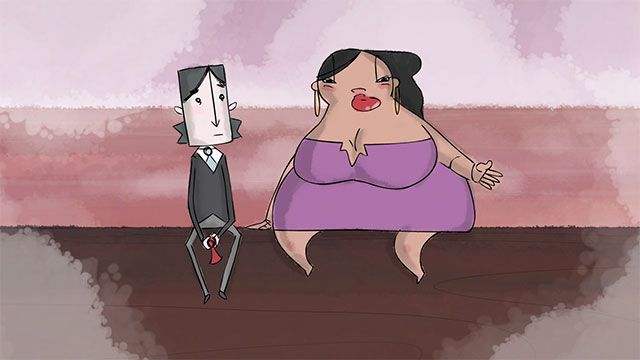 With its watercolor-esque art style and simple, compelling compositions, Simon Cottee’s the Wedding is an oddly striking little film.  Now, when I say “little” I don’t mean so in a bad way, but rather it’s intended as a badge of admiration. Cottee has the courage to tell a quiet, personal story, one that feels intimate and small. It’s a film that slowly sucks you in, its melancholic tone grabbing hold and drowning you deeply into a world that progressively gets more and more surreal. The result is unquestionably poetic, a family tale soaked with a surprising amount of weight. This is a story about personal relationships—a meditation about how we come to be who we are, a visual essay that actions—especially by those of the same kin—have lasting consequences. That’s an impressive feat for any film, let alone one that is just a spry five and half minutes.

Our first person narrator is perfectly lugubrious, his low-key montone depicting events with a detached, almost clinical air. The result is a tone that’s difficult to describe, wryly humorous one moment, oddly affecting the next. Paradoxically, it’s almost as if the narrator’s apathetic delivery infuses the piece with more emotion—his lack of interest serving as a defense mechanism, an armor forged long ago to protect him from his father’s harsh treatment. When combined with several comically absurd one-liners—from polio stricken siblings to gravestone epitaphs—the pathos present in the piece only grows.

Like the narration, Cottee’s visuals are decidedly reserved. As he relates, “when you’re starting to learn to animate you always make these big outrageous movements and play around with how crazily you can move something, but to play it straight and minimal can be a real challenge. So I tried to be as reserved as possible with everything I did, because that kind of melancholy acceptance and reservation needed to be felt visually too.” The film was created “tradigitally”— Cottee hand-drew the characters directly into the computer using a tablet, but then animated them using old school techniques. Backgrounds were drawn in Photoshop and then composited with the character animation in After Effects.  The result is complex in its lack of complexity, simply-rendered characters interact in front of beautiful, muted backdrops.

The Wedding is Cottee’s Graduate project for the Griffith University Queensland College of Art in Australia and has played at numerous international student film festivals. He’s currently halfway through his second film, the Kickerstarter-funded The Duck, which is an adaptation of short story written by Ben Loory. Be sure to follow its development at simoncottee.com or on twitter at @simoncottee. If Loory’s writing is any indication, Cottee’s calmly absurd style will be a perfect match for the author’s prose.  It will definitely be one to keep watch for.