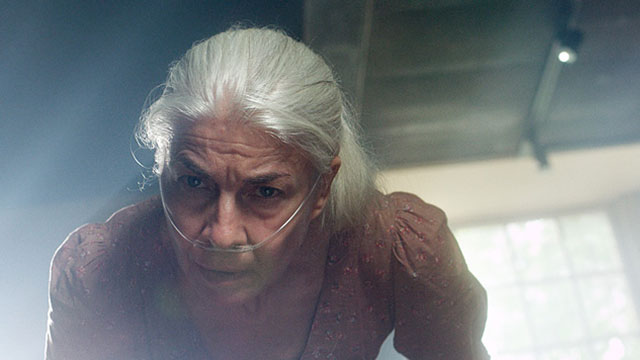 Fashion photographer David Field continues to demonstrate superior visual skills with his first film project, Caterpillar. This short is an unsettling glimpse into the life of an artist trapped by her own decaying body. Fortunately, this isn’t the cryptic tragedy it may seem to be but an inspiring message.

This simple fable begins with an image of youth that slowly pulls focus to an older woman sickly and alone. Her desperation is amplified by her ominous surroundings. Carting around her oxygen tank puts an exclamation mark on the declaration that this woman is tethered and unhappy. Her problem becomes worse when she finds a small caterpillar on her window sill. At first, this insect is a mere nuisance. The caterpillar population evolves into an infestation in her home. Eventually, this woman overrides her instinct to destroy them only to understand they are the answer to her dilemma.

David Field’s introduction into narrative filmmaking is promising, despite the common flaws of first films. Production value on this project demonstrates the director’s ability to make visual quality paramount. Attention to details keeps you involved in the film even though the story is told in the first shot. At times, the pacing of the scenes are painstaking. The filmmaker recovers the audience’s attention with enlightening images and a sympathetic protagonist. The film’s greatest asset is the visual instinct to show, not tell, an audience the story. Caterpillar is the calling card that just may give David Field’s film career its wings.

How was the process working on Caterpillar similar/different to working on your photography shoots?

The process of filming Caterpillar was fairly similar to my previous photo productions, beginning with an idea that’s developed through storyboards, and later executed with the help of my crew. The main difference is that on a photoshoot, not only am I directing, but I’m also operating the camera and taking on the responsibilities of an assistant director/producer. To me, this film production was luxurious, in that I was able to concentrate mostly on directing! Most of the learning curve began in the post-production phase, where things aren’t as simple as polishing a picture in photoshop. I was surprised to discover how much I enjoyed the sound design & scoring process. You are a professional photographer however, you did not shoot this project. Can you elaborate on this creative decision?

It wasn’t so much a creative decision as it was a practical one. There were just so many other things that I needed to focus my attention on during the production. I can’t begin to express my feeling of relief when I joined forces with cinematographer, Eric Giovon. Besides his technical prowess, Eric is a true painter of light, and shares a near-identical visual aesthetic as me. I definitely mapped out most of the shots in advance, but Eric brought something special and took our storyboards to the next level.

Since this is your first narrative film, did you have assistance developing the narrative?

With Caterpillar, I was testing the waters of narrative storytelling by adhering to a story told through moving imagery. There was much for me to learn in terms of writing, so I started small. I enrolled in my own do-it-yourself film school, which began with reading about a dozen books, including ones on screenwriting. When I wrote Caterpillar, it was from a standpoint of envisioning a story for me to enjoy making. However, the festival circuit was my wakeup call to consider a final audience who will inevitably share the experience. In a previous interview, you mentioned the idea for Caterpillar came from drawings in your sketch book. Can you talk about your creative process from drawing to screen?

Every now and then, a single image will come to me, which inspires an entire story to build around it. Caterpillar began with a sketch of an old woman spinning a cocoon for herself, and from there, she would spawn a brood of babies. Then I looked inward to re-think the concept of birth. As an artist, each individual project becomes a baby that’s nurtured into existence, so the woman became a metaphorical extension of myself. She escapes the void of stagnation by discovering the creative fountain of youth. I spent a month creating detailed concept drawings, which I used to assemble my dream crew. As the enthusiasm grew, I teamed up with an experienced storyboard artist to hammer it all out. We used reference photos from the house to decide on every composition, camera movement and cut, for every shot of the film.

You have an impressive crew. How were you able to hire them?

It was pure dumb luck that lead me to the crew that I have. It all started with my friendship with Steven Soderbergh’s editor, who got his start by living on my couch! When he offered to help me, all the pieces began to fall in place. Still though, much of the crew stemmed from previous work relationships that I established through my commercial photography background. Did this experience encourage you to continue working on films?

Caterpillar was the most creatively fulfilling experience of my life, in which I was able to incorporate all of my talents. From creative writing, to drawing, photography, music, etc. Heck, I even tapped into my graphic design skills for the DVD packaging. I definitely look forward to doing it again. In fact, there is something in the works at this very moment. I recently teamed up with a seasoned novelist who is helping me co-write a feature screenplay. It’s looking to be quite dark & tense, yet equally as beautiful. And oh yeah… this time, there WILL be dialogue!

Thanks to David Field for the interview! We’ll be watching for your upcoming projects.