Eight-year old Andy thinks he has superhuman abilities in this Cannes-honored film from New Zealand.
READ REVIEW
Next Previous 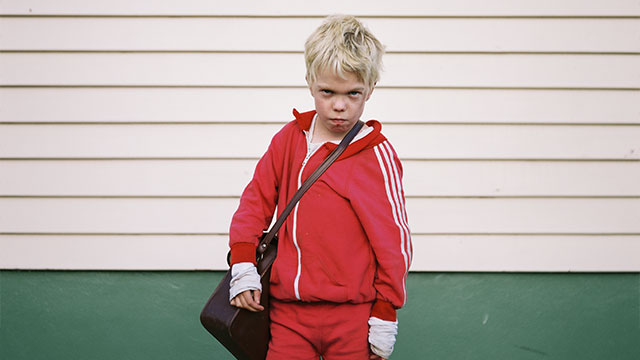 Remember that “crazy” kid in class who lived in his own world that you definitely didn’t mess with? That’s Andy. Six Dollar Fifty Man is set in a 1970s suppressive elementary school in rural New Zealand where awkward 8-year old Andy has to overcome the everyday struggles of bullying, abuse, and love. Enough for any ordinary child, but in Andy’s world, he has super human abilities—abilities to withstand pain, scale buildings, and leap from rooftops—or so he’s convinced himself. But when Andy has a run-in with the class bullies, his fantasy and reality collide.

Andy (played by Oscar Vandy-Connor) is one of the more inspiring character I’ve seen in a long time. In a world of harsh realities, he maintains a delusional optimism in the ability of the ordinary to do the extraordinary. For those moments when the world misunderstands you—stay true to your delusions. Sometimes it’s the world that needs to change.

Directors, Mark Albiston and Louis Sutherland, do a fantastic job melding gritty realism with Hollywood super heroism. The great cinematography and shot framing place you into the world view of an 8-year old where small things have big consequences. Mark and Louis are premiering their first feature film, Shopping, at Sundance starting Feb 18th.