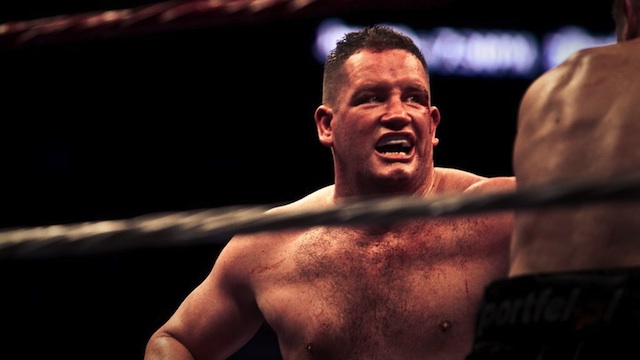 It’s a cliché for a reason. The washed up boxer, clinging on to faded glory, looking for that one last chance. Kevin McBride had his “Rocky” or “The Fighter” moment, but it was almost a decade ago. A journeyman, McBride was selected to face Mike Tyson, the former “baddest man on the planet” as a patsy, an easy conquest on for the legend’s one last comeback.

Everyone expected McBride to go down, but he refused to be compliant. Beating Mike Tyson was a huge upset, and the archival footage provides the historical framing for this profile doc. McBride’s achievement does not console him however, it does not provide reassurance and pride at the end of a long career, it has instead fueled a insatiable hunger to recapture that glory. Brooklyn filmmaker Joshua Weinstein captures that obsession in an intimate film about the fighter, mounting yet another comeback, while his body fails him and his family waits in limbo for the next phase of his life to begin.

Boxing has provided great subjects for film. There is an elemental nature to facing off against an opponent that still registers even as the popularity of the sport craters. All those emotions are present in Weinstein’s film: pride, desperation, yearning and fear—McBride and his family fear physical harm, but he also fears being lost—of not doing the only thing he knows how.

Weinstein is a promising filmmaker. This film recently completed a healthy 2012 festival run, and his current film, a medium-form film about NYC cabbies called Drivers Wanted is at fests and on DVD now (here’s a nice interview at Filmmaker Mag). A working cinematographer, Weinstein fits in well with a new generation of documentary filmmakers like Jason Tippet or Jeremiah Zagar for whom beautiful images are not an afterthought in the process of their story-telling, where personal style and personal stories intersect. We’re glad that he has made this short film available and will continue to keep an eye out for his work.