A future Earth where the Sun hangs still in the sky, and times of day are fixed locations, a soul-deadened coyote reluctantly guides a band of rebels infiltrating an industrial fortress.
READ REVIEW
Next Previous 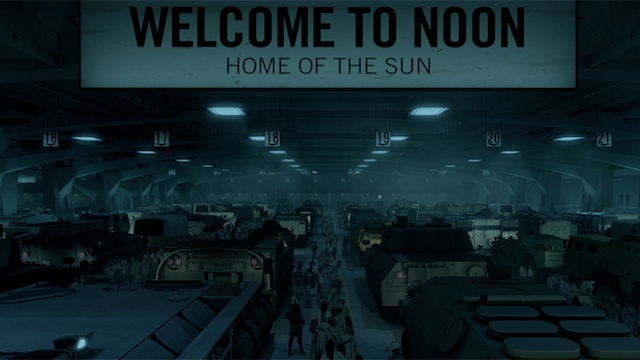 We’ve seen an explosion of sci-fi proof of concepts hit the online world over the last year. Purists take issue with the incompleteness of the narratives, deriding them as commercials for features that may never be. Our position is that the ability to move short film into styles and genres previously limited by technical ability and budgets is a marvel however, and, done right, there is potential for impressive storytelling within the world-building and VFX. So today we present the latest in this growing trend, NOON, a finely crafted piece from Hollywood Art Director Kasra Farahani.

The hope of Hollywood attention is of course a primary motivation for creators of these films, and today’s entry is an interesting example of the tension between hinting at the expansive, and delivering self-contained satisfaction. Farahani is upfront about his intentions with NOON, rather than craft the piece as a teaser, Farahani chose to shoot a complete scene from his already finished feature film script.

Imagining a post-disaster Earth where times of day are at fixed locations, the choice of scene is solid. A “coyote”, our main character is attempting to smuggle rebels into NOON, situated at the North Pole, and runs into issues at the checkpoint. Who these rebels are, and what they mean to do, is something that is not clear, one must rely on the filmmaker’s excellent website for further exposition. However the scene provides tension and resolution to the immediate conflict, giving viewers some of that narrative satisfaction we discussed. The relatively intimate scale means that the main character gets more attention than usual as well, and though the world-weary smuggler is a bit cliche, Bill Khoury imbues the character with the grizzled resignation it requires, and I could easily care where his story arc goes.

As you might guess from Farahani’s background, the Art Design is rather spectacular for a short. Sporting a noticeably higher budget than we usual see in these types of work, there is a surprising amount of sets and props utilized in addition to well-integrated CG. The only disappointment in this approach is that it does blunt the futurism on display somewhat. 250 years from now trucks still look remarkably like trucks? Still, the cinematic quality of the checkpoint world is really quite good, and though we are thrown into the middle of the character arcs, I was quite entertained throughout the film’s 12 minute long runtime.

Does NOON have a shot to grab a development deal like previous shorts have? I don’t pretend to know. The relatively limited world-building of what Farahani is able to achieve on the budget will probably work against him, but the peek of NOON at the end is enticing, and the ability to helm a professional-level production could prove reassuring to potential collaborators. Also, while it is good to have a completed script to pitch, sometimes the promise of great things is better than actual thing, so I’m curious if this ends up being a good approach, especially considering that producers will probably request extensive rewrites no matter what. Only time will tell, but experimentation at this point is what is required, so thanks to Farahani for producing and sharing this work, we’ll be watching closely.