Jean-Paul Clément checks into a hotel and faces a personal dilemma in this short from Cashback director, Sean Ellis.
READ REVIEW
Next Previous 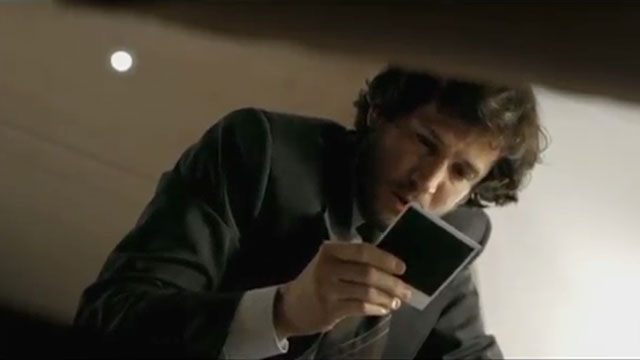 With the Sundance Film Festival rapidly approaching, we here at Short of the Week thought it might be interesting to highlight some of the short form work from the festival’s 2013 crop of feature filmmakers.  First on the docket, this BAFTA nominated short from director Sean Ellis. For cinephiles, Ellis’s name should sound familiar—his 2004 short Cashback was nominated for an Academy Award, and, later in 2006, he was able to transition that film into a full fledged feature of the same name.   At this year’s Sundance Festival, he’s premiering his third feature, Metro Manila, a dramatic thriller set in the Philippines’s titular megacity.

Voyage d’affaires (The Business Trip) takes place in a decidedly different milieu than Ellis’s latest Sundance outing—a posh hotel in France rather than the seedy slums of  Manila. Yet, it’s clear his prowess as a filmmaker is still on display here.  Our protagonist, Jean-Paul, is on a business trip.  His longtime girlfriend is breaking up with him—he’s boring, vanilla, not spontaneous enough.  And, so begins, a small scale story about a man in a hotel room, trying to re-instill some passion into his life—both literally and figuratively.

Without spoiling specifics, Voyage d’affaires could essentially classed as a “one-joke” sort of film—the type of short hinged on a clever little twist that manages to sneak up on you by the end. But, unlike lesser examples of this ilk, Voyage d’affaires is about more than just its comical twist—or, perhaps more specifically, it builds up to its end turn so effectively that when the rug is pulled out from underneath you, you practically freefall and faceplant into the ground. It’s a brilliant little piece of writing, as clever and humorous as it is personally horrifying. More importantly, it leaves you wanting more. The film is a small little snapshot to something bigger, a prelude to a grander message: Ellis seems to be hinting that one can’t change overnight and that it’s foolish and potentially dangerous to try.

Considering the film’s pedigree, it’s no surprise that the technical aspects of the film are all superb: the smart, assured direction, the simple, but elegant visuals—all of it is polished and worth noting. Even Inglourious Basterds star, Mélanie Laurent, makes a brief appearance as a hotel clerk. She’s perfectly cast in her single scene.

Hotels rooms are inherently fascinating places—isolated little prefabricated boxes where different people make themselves completely at home, only to abandon their newfound residence a few days later. There is a certain mystery to all that has happened—whether it be lurid or mundane—in a hotel room prior to your arrival, and Voyage d’affaires expertly plays upon that innate curiosity.  Moreover, essentially taking place in one location, the film is a prime example of what can be accomplished with very little cinematic collateral—just a room, a few lights, a tantalizing polaroid, and a scorned lover predisposed to make some very bad decisions.