Nominated for a 2013 BAFTA, a tribe of Norse warriors traipse across a barren land after battle. Their chief, near death, is about to hand over power to his son when an army of a completely different kind descends upon them.
READ REVIEW
Next Previous 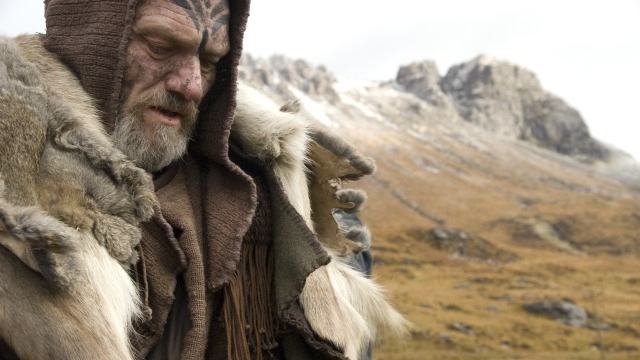 While I’m resolutely on the side of the internet, I do envy festival-programmers a smidge from time to time. They get to play tiny dictators. I wish I could herd viewers into a dark pen and unilaterally decide how the next 90 minutes of their lives will progress. No need to preface, explain or justify editorial selections, the audience would place their trust in me and relinquish control. I would take away their agency as viewers, but, in the end, if I show enough work like Johnny Barrington’s remarkable Scottish short, they would rapturously praise me.

Instead I program entertainment for the the internet, where 90 minutes of uninterrupted attention might as well be 90 unicorns and 70% of views end before 30 seconds are up. It’s a great world, full of choice and gratications, both easy and sophisticated, but it also means that you might reasonably expect me to explain why you should click play in the first place, and why you should sit at your laptop for 14 minutes and not press pause to check your email, dash off a tweet or hit your favorite news site.

And I really don’t want to have to explain this short! Barrington shows such an easy mastery over audience expectation that you should come in as open and fresh as you can possibly muster. Is it gruesome? funny? smart? tense? All of the above!? I don’t want to tell you!

Instead I’ll cheat and validate the film absent of analysis, relying on the praise of others. The film premiered last year at Sundance to great applause. Anecdotally I can tell you that it was one of the shorts that I heard receive the most chatter from festival-goers and filmmakers while I was in Park City. Funded by Creative Scotland and Channel 4, the film has had a good run on TV in the UK and Barrington’s assured direction has been honed in prestigious programs such as the Director’s Lab formerly run by the UK Film Council (R.I.P), and the Berlinale Talent Campus. Also in big news this morning, the announcement went out that the film is nominated for a 2013 BAFTA award for best British short.

An impressive tally no doubt, and yet you likely have never heard of  T U M U L T. But that’s a good thing! Short film is great sometimes because it lacks hype. It doesn’t have the the teaser and 4 different trailers that exhaust you and your expectations before the film even debuts. So let yourself be caught surprised, like you would have been if you’d shown up in a dark theater with no prior knowledge of what to expect, invigorated by the faint hope that absent expectation and prejudice, you might be shown your new favorite film.