The 2003 short adapted into a surprising 2010 hit feature. The long process of tracking, hunting and transforming this king of the forest into a finished product is a time consuming process, but the final outcome is a reason to celebrate.
READ REVIEW
Next Previous 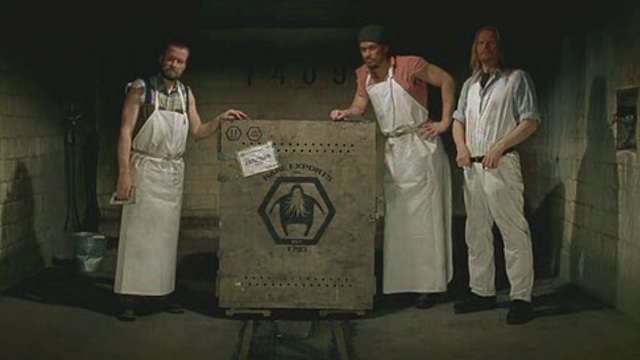 Happy Holidays! By and large I try to play the part of a high-minded curator, but I’m also a website editor with an eye towards pageviews. Thus, topicality is sometimes an irresistible lure—let’s get a Christmas short up!

Today’s selection is a vintage gem. Rare Exports Inc. is an early example of a web hit short film. Released in a pre-YouTube 2003, the Finnish production proved so popular it demanded a a 2005 sequel, Rare Exports: The Official Safety Instructions. A mock promo for a high-end Finnish trading company, the film distinguishes itself with its resolutely serious take on a creepy, but deeply unserious premise. I won’t go into too much plot description in case there is a chance that the film’s twist might take you unawares, but the film romantically describes the process by which the company’s signature holiday product is prepared.

The film is subversive to the occasion (it seems most of the Christmas shorts we feature are), but is very clever, and keenly tweaks some of the less endearing aspects of Christmas. Most obviously it pokes fun at consumerism, commodifying literally what is already a huge symbol the season’s slide away from  goodwill towards commerce, but also, by posing as the voice of  high-end purveyor, the film in some ways anticipated what the web has been able to do for brands. A joke in in 2003, the solemn voice-over extolling the fine skill, detail and craftsmanship of the Rare Exports Inc. product is now de rigeur for long-form branded web content.

It might have been more timely to feature this film last year, as that is when Rare Exports: A Christmas Tale, a remarkably well-received feature adaptation of the short, was released in America. That film was also by Jalmari Helander, and is yet another example of the talent and potential that is able to rise up through the shorts medium.