A Finger, Two Dots Then Me

Spoken word rock star Derrick Brown and the Holechek duo team up to deliver a moving piece describing where two lovers should meet after the lights get dim.
READ REVIEW
Next Previous

A Finger, Two Dots Then Me 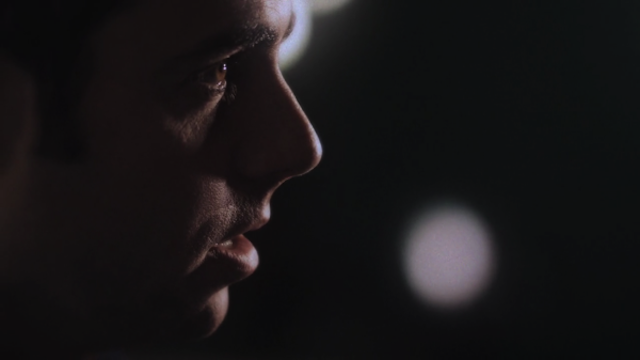 With A Finger, Two Dots Then Me, Derrick Brown shows absolutely no mercy as his poetry sneaks past all barriers to grab the very throat of your soul. This film is serious as it is clever. It is as spiritual as it is grounded. And, with this truly authentic delivery by Derrick Brown and the universally perfect visuals by the Holechek brothers, this film exemplifies how sometimes just heartfelt words can be the inspiration for a truly moving short.

Derrick Brown’s delivery addresses two deep subjects that can sometimes polarize an audience—love and the afterlife. Eek! And, I have to be honest, at first, when it was clear that this film was going to address these subjects, I wondered if getting back to my work might be better than watching another trite ramble about emotions and the cosmos. But, Derrick Brown and the Holechek brothers clearly don’t have any sympathy for our cynicism. Nope. They just hold the course regardless. Frame after frame and word after word, this team inches closer and closer to your tender side no matter where you try to hide it. With so many films trying to lure emotions from you, why does this film work so well? It works because Derrick’s words are unquestionably genuine and perfectly matched for what feels like a visual soundtrack by the Holechek brothers. Ultimately, this leaves the audience with little choice but to allow this moving piece to resonate within.

The delivery of this unique poetic piece alone may have you awkwardly trying to hold back the tears at work (cough cough), but it doesn’t stop there. The Holechek brothers recognized the role of the camera, choosing to compliment the narrative with universal images instead of trying to take over. The Holechek brothers visually translated the poetic delivery by tucking in perfect shots with edits that hit all the right beats. They confess that they have never had a project where they obsessed over every edit quite as much as this one. Overall their contribution works seamlessly and it effectively keeps the audience engaged while one man basically spills an unfettered love letter for almost eight minutes straight.

It’s no surprise that Derrick Brown’s poetry is so moving. He’s been flooring people with words since at least 1998, performing at over 1,800 venues and opening for music acts such as the Cold War Kids. The Holechek brothers had seen him perform 10 years before they had the chance to work with him, and when they heard Brown’s piece, A Finger, Two Dots Then Me, they were absolutely convinced that everyone, not just fans of poetry, should hear it. After writing, editing and directing their own previous work, they were greatly excited to have Derrick Brown hand over one of his poems to them to see what they could do with it.

The results are clear.  On the film festival circuit, the film has had a string of successes going on to win The Best Short Film at the Miami, Boulder, Sacramento, and Anchorage International Film Festivals as well as winning the audience award at DC Shorts Film Festival.

Where some films may focus on fast action visuals, this film reminds us that sometimes all it takes is honest and powerful words to inspire both filmmakers and the audience.