Steven couldn't see how his day could get any worse. That's because he's looking the wrong way.
READ REVIEW
Next Previous 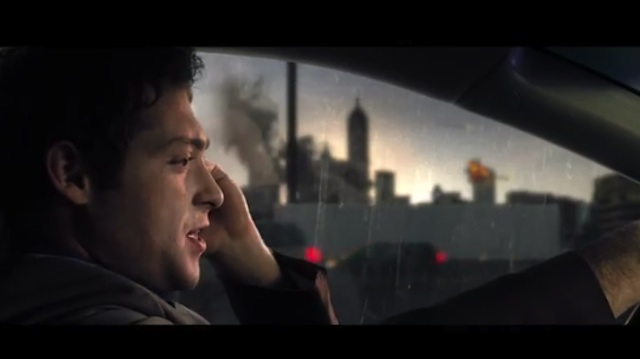 Sometimes the simplest ideas are the most brilliant.  Such is the case with Blind Spot, a deliciously clever “one shot” short from director Matthew Nayman that perfectly marries slick concept with smart execution.

While driving to the airport, Steven, our protagonist, is having a doozy of a time changing his airline flight reservation, lost in the interminable labyrinth of a phone customer service hotline. But, as his frustration grows, something of much bigger significance begins to build just out of his viewpoint.

Upon watching a short like Blind Spot, one may initially write it off as one note.  After all, in lesser hands, the concept alone could yield mediocre results.  Fortunately, Nayman’s handling of the material firmly transcends the film beyond gimmick, eventually escalating to the point where just the slight movement of our main character’s head is enough to make you gasp in wonder. This reaction stems from excellent pacing.  As the film builds—the out-of-focus action becoming more and more extreme—so too does Steven’s irritation. Two dramatic situations unfold simultaneously, each arc mirroring one another as they ascend to their climax  The only difference between the two is the scale, the enormity of one making Steven’s irksome conversation seem trivial in comparison.

And, really, that’s what makes Blind Spot work. The film is suggesting that we are so wrapped up in our own problems, in our own annoyances, that we are unable to be shaken from our selfishness to see that, actually, there’s much bigger fish to fry. Outright, that message could easily come off as trite.  Yet, as its title suggests, Blind Spot is mature enough to keep any moralizing distinctly out of view, subtly in the background.

Shot on greenscreen in a single take, Blind Spot is a prime example of a brilliant idea executed on a shoestring budget (from concept through post, the film cost less than $2000 for Nayman to produce).  The entire city was composited in post by Nayman’s effects supervisor, Mike Boers, who worked on the project in his free time over the course of six months.  The resulting product is unquestionably well put together. If interested, do check out the compositing breakdown on the film’s website.

Visual effects notwithstanding, Blind Spot successfully presents a unique perspective on what easily could have been very standard disaster fare.  Not to mention, it may even encourage you to buy a hands free headset—as they say, it never hurts to have a better awareness of one’s surroundings.