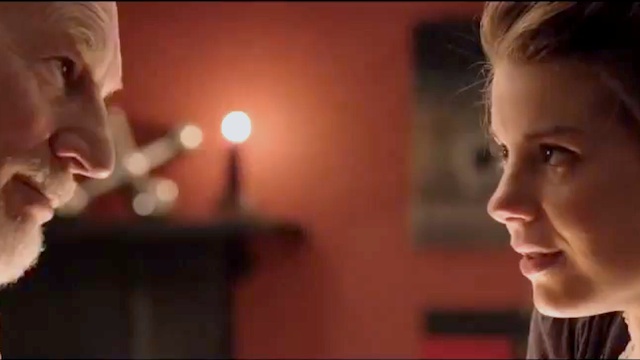 An adaption of a theatrical play centering on the last months of Shakespeare’s life doesn’t instantly sound like something that would suit the short film format. Yet, Angus Jackson’s bold short Epithet, inspired by the Young Vic theatre’s recent production of Edward Bond’s play Bingo, proves to be a (literally) gutsy and refreshing addition to the medium.

With its origins on stage and a sleazy lothario at the core of its plot, it’s hard not to watch Jackson’s film and be reminded of fellow theatre-to-film adaptions In the Company of Men and Your Friends and Neighbors from director Neil LaBute. Like these films, Epithet employs snappy dialogue, bad language and the odd moment of controversy to hook its viewers, yet like LaBute’s early work, it’s the performances that really stand out.

With a cast taken directly from the stage production (also directed by Jackson), it’s a rare and somewhat magnificent sight to see an actor of Patrick Stewart’s magnitude taking the lead role in a short film. With a character-driven narrative at the heart of Epiphet, the films success rests largely in the hands of the performances and Stewart and his fellow thespians do a sterling job of giving this all too brief a story some real depth.

Shot on the Arri Alexa, the same camera recently employed to shoot features like  Skyfall and The Avengers, Jackson and his DoP David Higgs opt for hand-held shots that stick close to their performers and provide an added level of realism to Epithet’s gritty narrative. Assembled with uncomplicated and precise post-production provided by The Guardian’s video producer Christian Bennett, Epiphet is a short of solid production values that is all too happy to put its focus on story, instead of ground-breaking techniques.