This holiday season, ask if you know where your Teddy Bear really comes from.
READ REVIEW
Next Previous 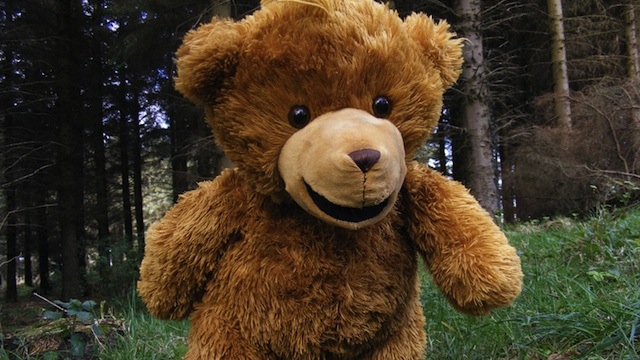 As the holiday shopping season comes around again, it might do us some good to take a look at where our toys really come from. And you might be surprised that behind the innocent face of a child’s teddy bear lies a dark and bloody secret.

Tufty begins in a toy shop but quickly takes us into the previously unknown habitat of the “teddy bear.” As we see these creatures gamboling in the wild, communicating and playing together in groups, we might be reminded of chimpanzees or lions in a nature documentary. But with the snap of a twig we’re alerted to a dangerous intruder, a man with a gun. Suddenly, the idyllic scene is shattered and our furry friends are running for their lives. When one bear becomes separated from the rest of the group, he finds himself being targeted by the hunter, and soon his fate is sealed.

Although the sight of a teddy bear running through the forest is inherently ridiculous, the filmmakers are able to elicit genuine pathos for these wild creatures, and some of the images of how a wild bear becomes a stuffed toy are pretty disturbing. I found myself thinking of how human society sees the rest of the world’s creatures strictly in terms of resources; can we eat it? Can we tame it? Can we sell it? Yes, this film about a teddy bear actually made me think about real animals.

This might seem at first glance to be a one-joke film, but there’s much more going on. You may still end up spoiling the children in your life with stuffed animals, but you’ll have a hard time shaking the picture of the taxidermist at his gruesome work. The filmmakers’ use of puppetry for the “wild” bears is also quite effective, especially when contrasted with the dead eyes and stitched mouth of Tufty. Sure, we’d all like to think our toys come to life when we’re not around, a la Toy Story. Tufty takes the opposite and much more disturbing approach.