Isolated in a place where twisted creatures torment him from the dark, a man desperately tries to find an escape.
READ REVIEW
Next Previous 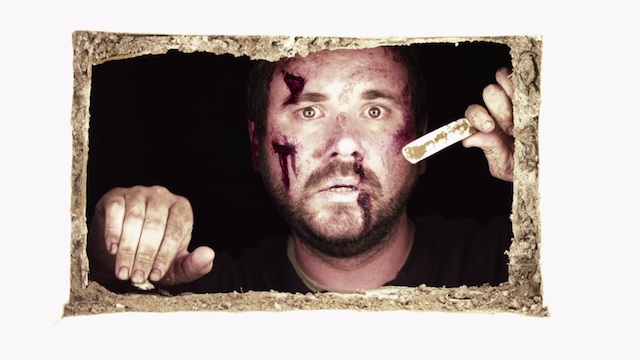 Holidays are a tried and true way to launch a short film. If you tie your film into the festivities, you can potentially access the millions of sites, curators and fans desperate for something easy and topical to share. Of the all the holidays, Halloween always seems to be the maddest for shorts though, perhaps because Horror is such an insular genre—All Hollow’s Eve really one of the only opportunities for a horror short to break through.

So I do always look forward to the Halloween rush, and this year did not disappoint. Like previous years, where we’ve been treated to new short work from up-and-coming horror directors like Mike Dougherty and Drew Daywalt, today we are gifted a short from buzzed about feature director Kristoffer Aaron Morgan, who is currently in production on his big screen debut, The Home.

No Way Out is the short, and it is a deliberately stripped down exercise in horror, emphasizing tension and suspense. Stripped down doesn’t mean homogenous in approach though. There is a “gotcha” aspect to certain scenes, there is a monster, but most notably the film has a palpable feeling of psychological horror to it.

As an audience we are dropped into the action with no context. We don’t know who is our main character (AJ Bowen), or what he is running from. The immediacy of the action means that we’re engaged before we can even ask these questions however, which is great, because answers are not forthcoming. Instead, atmosphere, starting with the terrific camera work takes precedence, and we understand that we’re watching a exercise—a demonstration of craft less than a story.

Like a puzzle missing pieces, No Way Out is a beautiful picture that is incomplete narrative. But, in a short format, that withholding can be asset, as we pay even closer attention in order to tease sense out of the horrifying and bizarre events. The final sequence especially is a surreal turn, one that is as viscerally horrifying as it is inscrutable. Morgan, along with writer Eric Vespe, have a bright future in features, and if they, or anyone needed validation of that, this short is like a Master’s Thesis.