An intense battle for love plays out in beautiful hand-drawn animation by Pixar animator, Erick Oh.
READ REVIEW
Next Previous 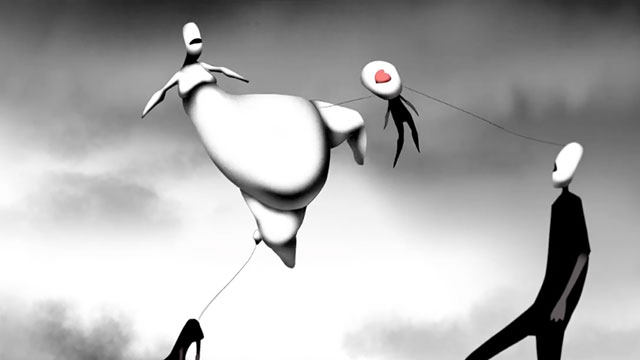 A lone being finds a heart and soon an intense battle breaks out among them. You could say the metaphor is a bit heavy-handed or that the concept isn’t new (Heartstrings). But the truth is, Heart does something which is very difficult—take a familiar idea to a new level. Just when you think the film is about to run away into the world of cliché, Erick twists the story toward the unpredictable.

Using digital techniques but every bit done by hand, the simple black and white animation has a fluidity and energy that’s gone missing in most animation today. Erick infuses his heart-wrenching parable with intense action. Soft bodies run, collide, and morph into new forms in a way reminiscent of the talented traditional animator, Patrick Smith (Puppet).

Heart has spent the last two years playing at Hiroshima, Siggraph, SXSW, and too many others to list. It also helped land Erick a spot at Pixar where he is now having contributed to Brave and the upcoming Monsters University film.