Teacher of the Year

It's a dark day in the life of Ethan Collins, a severely depressed, foul-mouthed elementary school teacher whose wife's recent infidelity and departure have left him questioning everything in his life.
READ REVIEW
Next Previous

Teacher of the Year 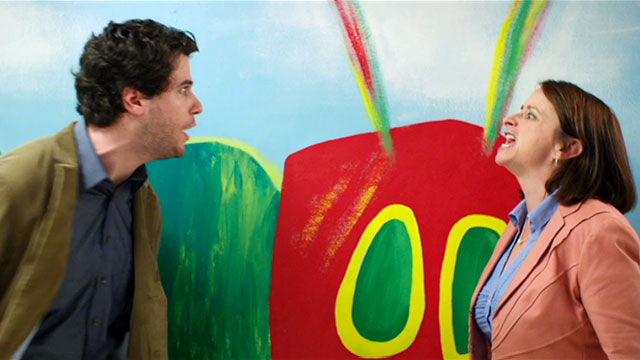 Standing in stark contrast to all the special-effect laden pizazz we’ve featured lately here on Short of the Week, Teacher of the Year is a film that plays with a decidedly different set of cinematic collateral. No cyberpunk post-apocalyptic futures or flashy CGI here—just a single location, some impressionable young minds, and their depressed, foul-mouthed teacher who’s having an extremely bad day.

Down on his luck, elementary school teacher Ethan Collins treats his classroom like a therapist’s office, substituting the boredom of education with his own morose existential minutiae. His students watch politely as he pontificates, kvetches, and curses like a sailor. To be sure, the trope of the foul-mouthed grade school teacher is easy comedic fodder, but the film supersedes cheap laughs by slowly developing the story, eventually taking us to a surprisingly earnest place.  This isn’t a sketch—although the situation is exaggerated, the characters are people with actual emotions who are experiencing actual drama. As with the best comedies, it’s not just about the jokes, and thus, the film is elevated beyond what easily could have been a one-note premise.

More impressive, however, is that the film hits its authentic beats without ever feeling hamfisted. Every time the short could potentially deviate into the overly sentimental, it manages to use clever dialogue to derail itself back to the land of the sardonic. It’s an engaging ping-pong match of tones that makes the narrative feel as unique as it is entertaining. All of this stems from equal parts deft script writing and pitch perfect comedic timing. When it comes to acting, I often believe that comedy can be harder to pull off than drama. Teacher of the Year perfectly illustrates this point.  The performances of all the leads—including SNL alum Rachel Dratch—are all strong. The school setting is another great comedic touch, creating an inherently funny visual juxtaposition of gold stars, boxed lunches, and our protagonist’s suicidal intents.

Teacher of the Year premiered at this year’s Tribeca Film Festival and has recently trumped up some strong buzz on the online twitter-verse. The film’s current home of Funny or Die is definitely an interesting one. Perhaps this is a sign that the site, typically known for its short viral fixes, is beginning to attract more substantive comedic content. That is, if short attention-spanned viewers can stomach the 17 minute runtime.