The Origin of Creatures

Limbs are on the prowl in this dark, futuristic tale based on the Tower of Babel from viral video provocateur, Floris Kaayk.
READ REVIEW
Next Previous

The Origin of Creatures 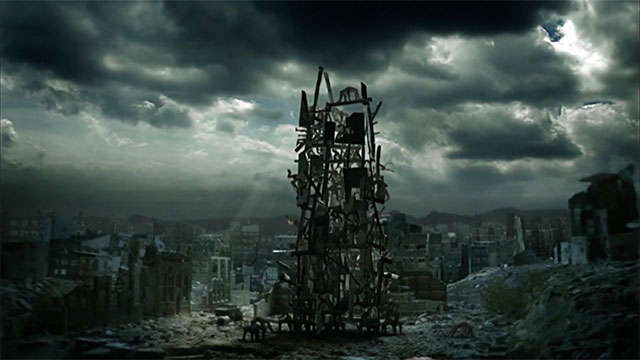 Among the remains of a devastated city lives that what is left of humanity. Human bodies are divided into separated parts of the body and are fused to special beings. Together, these creatures form a colony, they can only survive when collaborating. In the rubble of destroyed buildings they are trying to build a nest as large and as high as possible, so that the colony’s queen gets enough sunlight to reproduce, but due to miscommunication this mission is doomed to fail.

Based around the biblical story of the Tower of Babel, Floris Kaayk’s unusual short The Origin of Creatures is a heady mix of intricately crafted sets, spectacular CGI and sweeping cinematography. With a story based around cooperation, this is a film where all aspects of production are working in perfectly harmony with one another. Shot against a green screen in a studio, director of photography Reinier van Brummelen’s macro-lens glides gracefully around the meticulous detail of Kaayk’s miniature set, adding to the well-choreographed rhythm of the short. And as the narrative of The Origin of Creatures builds to its inevitable climax, Lennert Busch’s carefully-considered score adds to the assault on the senses. Combining perfectly with the dizzying flurry of imagery and excellent sound-design from Kaayk and his talented team.

Creator Floris Kaayk shot to fame earlier this year when his Bird-Man video went viral, being viewed by over 7 million people around the world. More attention was to come Kaayk’s direction when his Human Birdwings project, which he describes as an exercise in “online storytelling”, was unveiled as a hoax by news organisations around the world.

Whether you’re of the opinion that Kaayk is an eccentric or an innovator, there’s no doubting this is a filmmaker of great confidence, who is determined to push the boundaries of his mediums to the very limits. With his recent appointment as ‘Creative Ambassador’ of The Hague, 2012 has been an eventful year for the visual artist. We wait with baited breath to see what ingenious project is next to spring forth from the unpredictable mind of Floris Kaayk.