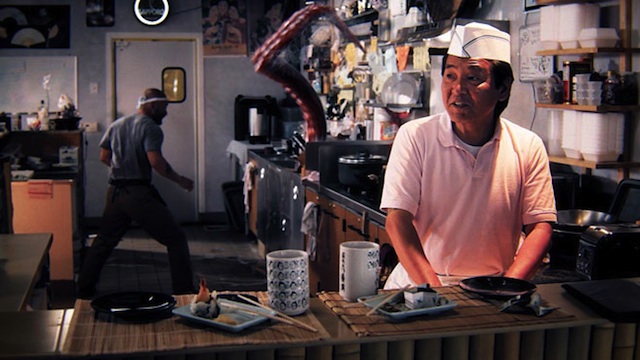 When it comes to special-effects driven shorts, it appears that Heath Ledger’s personification of the Joker said it best: “Why so Serious?” I mean, really, why does amazing computer generated wizardry always have to be so damn bleak?

Well, it seems that filmmaker Dan Blank is setting out to change all that, or at the very least, give us a sense of spectacle without all the weighty gravitas. In Monster Roll, Blank and his team are using the short form as a proof of concept for feature length ambitions. Certainly, it’s a model we’ve seen before, but never has this type of narrative pitch been filled with such colorful whimsy. The logline says it all: sushi chefs fight giant sea monsters. I mean, c’mon, the concept alone is enough to make you smirk.

Most impressive, however, is that Blank and crew actually manage to deliver on their crazy premise, creating a glimpse of a universe that is as quirky as it is engaging.  Enormous Sea Monsters may be destroying Los Angeles, but damn, is it fun to watch. The whole piece is filled with the sort of zany action sensibility that would make director Steven Chow proud. Just swap Shaolin Soccer players with killer sushi chefs and you begin to get the picture.

Blank has cited cinema classics such as Ghostbusters and Big Trouble in Little China as inspiration, and it’s easy to see the connection. Visual effects are only one aspect of the winning formula—Blank wants to complement his computer generated pizzazz with humor, style, and ultimately, heart.  Unfortunately, considering the short’s brief run time, we are only given a taste of his artistic aspirations.  Let’s just hope that like the more grimly themed fare that has come before him, Blank will be afforded the chance to give us the rest of the meal.